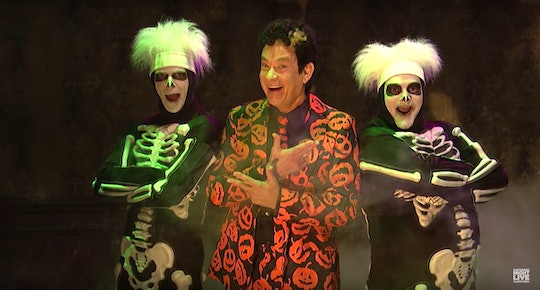 Where To Get A David S. Pumpkins Costume, Because He's The Scariest Part Of Halloween

Tom Hanks probably didn't know that he would inspire so many Halloween costumes this year, and I'm not talking about pilots who miraculously land planes on rivers. His "Haunted Elevator" sketch on Saturday Night Live has everyone trying to find out where to get a David S. Pumpkins costume. It appears Pumpkins is the new Harley Quinn. I can't blame people, this guy was kind of addicting (but, for the record, totally not scary).

During the episode, a couple rides "100 Floors of Frights" where Kenan Thompson plays the elevator operator, Mark. His face during the ride is a cross between mischief and holding back laughter, and was personally one of my favorite parts of the bit. The elevator opens up a few times. First to reveal a creepy bride with a noose around her neck, then again to show an evil waiter serving up a disembodied head. The third time the elevator opens it's to reveal a spookily decked-out Tom Hanks, or should I say David S. Pumpkins.

He sports a curly black wig, with one white stripe, and a suit with jack-o-lanterns copied and pasted all over it, complete with a matching tie. Next to him are his odd-looking B-boy skeleton backup dancers. The three take turns dancing, and then Pumpkins ends the wacky number asking "any questions?" But before the couple can utter a word, the doors shut. It goes on and on, consistently upping the absurd, which is probably why people love him so much.

So, you want to get down like Mr. Pumpkins this Halloween?

Unfortunately, David S. Pumpkins is a Hot Ticket Item. Everyone wants a piece of this costume, which is probably why it is out of stock on a lot of online retailers. It was originally created, designed, and sold by OppoSuits. The outfit is already sold out there, and at Party City, Spirit, Trendy Halloween, Walmart, and Target — although it might be worth checking back on those sites, just in case they restock by Halloween. Luckily there is one place you can find a David S. Pumpkins Halloween costume!

It might not be the exact pattern as Mr. Hanks' duds, but the Amazon pumpkin suit costume ($56) will certainly get the point across. After all, who else wears a fully pumpkined (it's a verb. Go with it.) outfit?

And don't forget, your costume is unfinished without the words "any questions?"