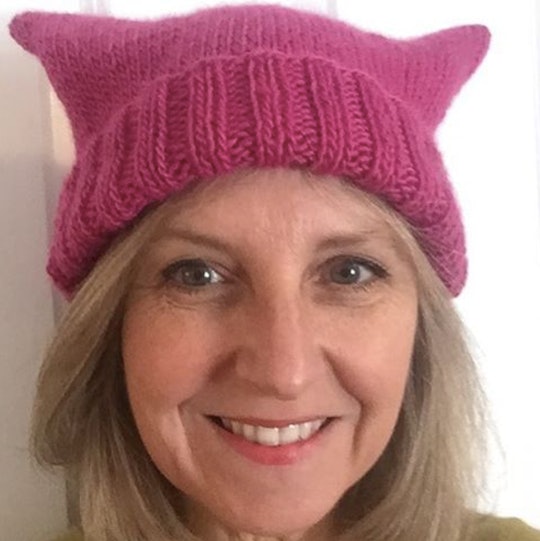 Thousands of protestors are planning to join the Women’s March on Washington in Washington D.C. on Jan. 21, 2017, the day after Donald Trump’s inauguration. And while there will likely be many acts of solidarity at the event itself, one project that's getting a lot of attention in the weeks leading up to the event is the Pussyhat Project. It involves knitting a pink hat, with appropriate cat-ear embellishment, and wearing it to the march itself, or knitting hats for others to donate to marchers. Fashionable and socially conscious, what's not to like? So... where can you get a pink cat hat for the Women's March on Washington?

The Pussyhat Project is the pet project of Krista Suh and Jayna Zweiman. Described as "recreational knitters," the two friends, like many, were upset by the results of the presidential election, and they decided to turn their devastation into action. Together, they designed a “pussy power hat” pattern ― a simple, stand-out of a hat that knitters, crocheters, and sewers from beginners on up can make for themselves or for other marchers.

The idea is simple: use the provided pattern, make the hat, and wear it to the march. Or, if you're so inclined, make more hats for fellow marchers, or for those participating even if you can't be at the event yourself. As reported by CBS News:

People of all ages and backgrounds have gotten involved, from a 99-year-old woman to a 7-year-old first-time knitter. The organizers say one man even made 100 hats for the cause. Suh estimates at least 60,000 hats have been made based on site traffic, but it’s tough to gauge just how many people have done so or how many hats each made.

According to the Pussyhat Project website's FAQs, "we encourage marchers to get a hat before they get to D.C. but we will also be distributing hats in D.C. the week of the march!" There's also a locations listing page, so you can find Pussyhat Project-friendly stores that have supplies, knitting parties, or that act as drop points for people who make hats and want them donated to marchers at the Women's March on Washington. How great is that?

The event itself is sure to attract a lot of women, but it welcomes "any person, regardless of gender or gender identity, who believes women’s rights are human rights," according to the official Women's March on Washington website. And the Pussyhat Project is no different — anyone is welcome and encouraged to get involved!

So where can you get a pink cat hat for the Women's March on Washington?

The below hats were made my Instagram user wizzardofecks, who captioned the image:

No matter how you get your Pussyhat, you definitely won't be alone in wearing them to what is sure to be an amazing event and act of solidarity for women in this country following the Inauguration. Find out more about the March here, and check out Pussyhat Project's Twitter for updates on the project leading up to the event.