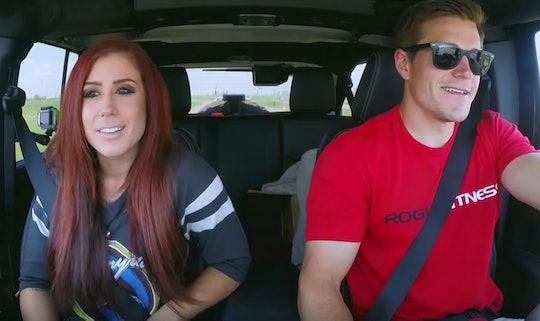 When Teen Mom 2's Chelsea Houska gave birth to her third child, a daughter named Layne, fans were super excited to not only see her newborn, but also to see how she's been handling life as a mom of three. Based on her newest Instagram post, she is handling it like a total champ. But fans will definitely want to know where to get Chelsea Houska's stroller after looking at this new photo with her brood, because her babies' wheels definitely allow her to have a lot under control.

After Layne arrived into the world on Aug. 29, according to People, Houska became the mom to three young kids (with two of them in diapers) — 1-year-old son Watson, and 8-year-old daughter, Aubree, from a previous relationship. Getting out of the house with two babies and one daughter in elementary school isn't super easy — even if two people like Houska and her husband, Cole Deboer, are up to the task, because that is a lot of mouths to feed and diapers to change at once.

But Houska definitely has some help thanks to her stroller, which she featured in her Instagram post from Saturday. In the photo, Houska can be seen standing on the sidewalk with Aubree while Watson and Layne comfortably sit in their multilevel stroller.

People don't need to do too much searching to know that Houska's stroller is the Vista stroller by UPPAbaby.

Her stroller is a great way for her curious, growing son, to see the world around him while she keeps an eye on her baby who is turning just 1 month old in a few days. The best thing is, there is storage underneath the stroller, which lets Houska store any necessary things for their family outings.

But this stroller is definitely an investment piece — parents can purchase the gray colored multilevel stroller (which comes with the bassinet) for around $1,000. A boutique, Albee Baby, has the stroller in stock online for $1,129.97 while another boutique, PishPosh Baby, sells the stroller for $1,089.98.

Houska's super stylish car seat cover is sold separately; her plaid car seat cover is from the online boutique Itzy Ritzy and costs a cool $29.99. But it does more than just cover baby Layne from the outdoors; it also can be worn as an infinity scarf (on the days that moms just need a bit more warmth), nursing cover, and shopping cart cover, according to Itzy Ritzy. Talk about getting your money's worth, right?

Although Houska looked so composed in the photo, Houska revealed in the comments of the post that it took her a while to figure out how to set it up. For people with the same problem, there are plenty of YouTube tutorials that walk parents through every single feature on the stroller. So no need to panic.

Rest assured that Layne (and her stroller) will be featured in the next season of Teen Mom 2. And given how cute Houska's style has been since giving birth to Layne, I can't wait to see more of it.