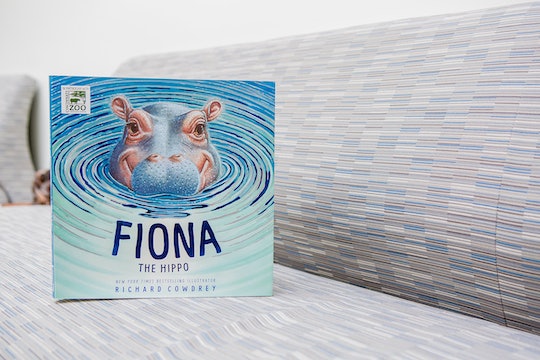 In case you forgot, a star was born at the Cincinnati Zoo in early 2017, and that star goes by the name of "Fiona the Hippo." After her birth, people all across the nation fell in love with the little hippo, who was born prematurely and had a small chance of surviving. But, Fiona prevailed, and her heartwarming story continues to fascinate people more than a year later. And those who are still in love with this story are probably wondering where they can get Fiona the Hippo's new children's book so you and your kids can relive this inspiring tale.

People thought Fiona barely had a chance of survival after her birth in January 2017 when she arrived six weeks ahead of her due date, according to ABC News. When she was born, Fiona only weighed 29 pounds, as ABC News reported, which is a stark comparison to the average weight of a newborn hippo which can be anywhere from 55 to 120 pounds. But, after zoo keepers fought to Fiona alive, she proved everyone wrong by taking her first steps a few weeks after she was born, according to People. It's the kind of story just made for animated children's films — and books, too.

Fiona the Hippo's newest book, Fiona the Hippo by Richard Cowdrey, retells that incredible and inspiring tale in a picture book format through hand drawn photos and words that children (and their parents) can understand and appreciate, according to People.

The best thing is, Fiona the Hippo, is available to purchase right now on Amazon for $12.61 — and it's available through Amazon Prime, so parents can read it to their kids, like ASAP.

Crowdy told People that he felt a lot of interest in retelling Fiona's story for the younger generation who really need, yes need, to hear it. Crowdy said that his book addresses Fiona's slightly scary birth and everything that comes after — and the book isn't sad at all. As he told People:

But the excitement of the other zoo animals becomes the focus. You see her finding out who her parents are, since she was separated from them at birth. There are a lot of sweet moments. We don't want to shock kids.

This isn't the first time that Fiona's story is being told. Fiona has had activity books made about her and a picture book published with actual photographs (not drawings) of her. But, parents can never have enough inspiring, feel good books in their children's library and this real life story can teach kids a valuable lesson that they too can overcome hardships and troubles. And parents seem to agree with this, because the book is currently sitting at the top of Amazon's Children's Books Hot New Release chart.

The best part about Fiona's story is that everyone has been in her shoes at some time in their lives. Everyone, both young and old alike, has probably felt that someone was doubting them, but with a little nurturing and hard work, they were able to overcome their struggle. That's why Fiona's Facebook TV show has millions of viewers and she attracts visitors from all over to catch a glimpse of her at the Cincinnati Zoo, according to NPR. "She has been relatable to everyone," Crowdy told People.

It's a story that has been told and retold for ages — but the best thing is that this is one real life fairytale with a happy ending. Instead of reaching for those classic children's books at bed time, parents should consider picking up Fiona the Hippo's new book instead.