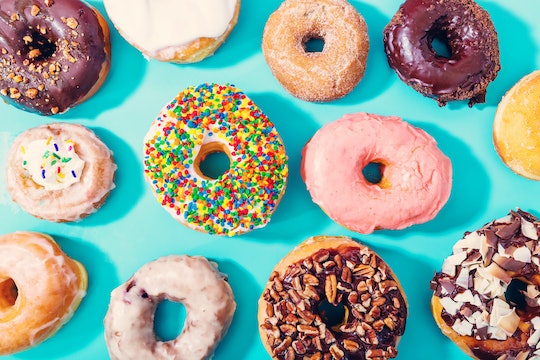 There is one random holiday that everyone loves, and that is National Donut Day. At donut shops all over the United States on June 1, people can just waltz in the door and grab a free treat. It's glorious. So knowing where to get free donuts on National Donut Day is crucial, because you need to plan ahead for such a big reward.

Both donut chains and local bakeries celebrate National Donut Day, so you're probably going to get the chance to sample some free treats this Friday. Some places require another purchase first (such as a drink), whereas other locations offer a donut for free. Although a lot of larger chains are profiled here, definitely check with your local donut shops and bakeries for deals specific to your town or city. Whether you live in an intimate neighborhood or a sprawling metropolis, there's probably a free donut, doughnut, or do-nut with your name on it this Friday.

In recent years, the holiday has grown tremendously in popularity, perhaps fueled by all those #NationalDonutDay tweets. In fact, even Burger King is (surprisingly) trying to get in on the donut game this year with the Whopper donut, which is apparently a regular Whopper with a hole cut in the middle, as noted by Thrillist. To be honest, this is a little less frightening than the idea of a burger made with donut buns.

Food stunts aside, this holiday actually has a charming place in American history. The first National Donut Day was celebrated in 1938 to honor the "Doughnut Lassies" who volunteered with The Salvation Army, bringing clothes, supplies, and baked goods to the troops during World War I, as noted by The Salvation Army's official website.

Because supplies were scarce on the front lines, some volunteers fried up donuts in soldier's helmets to cheer up the troops. A national love for donuts soon swept America, and the rest is history. So if you're in need of a donut fix come Friday, here are the places you need to go.