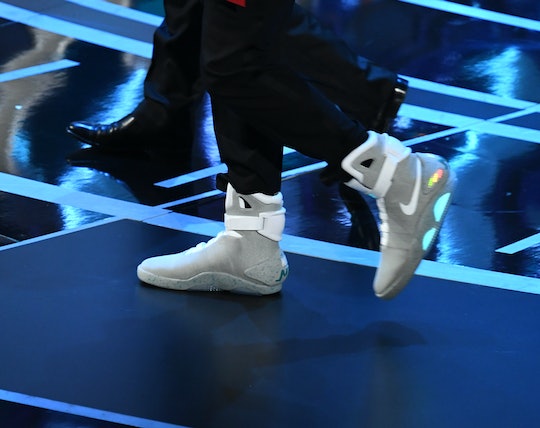 Where To Get The 'Back To The Future' Sneakers

Last fall, Nike raffled off a small quantity of some futuristic sneakers to benefit the Michael J. Fox Foundation, which funds research for a cure for Parkinson's disease. At the 89th Annual Academy Awards on Sunday night, it looked like actor Seth Rogan was able to snag himself a pair of the exclusive Nike Mags. Even though only 89 pairs were made when they were first released last October, there are ways to get your hands on some. So here's where to get Back To The Future Nike sneakers Rogan wore at the 2017 Oscars.

Interested buyers can no longer buy the light-up, self-lacing shoes, that Marty McFly wore in Back to the Future II, directly from Nike. You'll have to head over to sites like eBay and Amazon to find people looking to sell the futuristic sneakers. At the time of the Oscars, some resellers listed the Nike Mags from as low as $700 to nearly $13,000. On Amazon, the kicks were selling for almost $1,000.

Expect that price to hike up if you're looking for a pair in mint condition right after Rogan was spotted wearing them. According to shoe fanatic site SoleCollector.com, since the charity raffle ended last October, the sneakers have sold from $30,000 to $60,000 on eBay, with an average around $40,000.

According to The Hollywood Reporter, Michael J. Fox was the first person to get a pair of the power-lace shoes last year, "coinciding with Back to the Future Day on Oct. 21, 2015, the exact future date in Back to the Future: Part II that Marty travels to from 1985."

The kicks first debuted in 2011 as limited-edition replicas and the 89 additional pairs were sold via raffle to raise funds for The Michael J. Fox Foundation last year. The original shoes were also auctioned on eBay in 2011, according to FootwearNews.com.

Rogan wasn't spotted wearing the self-lacing shoes until he took the stage at the Oscars. On the red carpet, he was wearing formal shoes with his tuxedos and then had a quick costume adjustment before he joined Fox on stage as a presenter.

Getting your hands on a pair of these Back To The Future sneakers will most definitely set you back a pretty penny. But, if shoes are your passion and you have the funds to spare, then be ready to set off on an online shopping mission. However, with any consumer-to-consumer shopping site, always err on the side of skepticism and do your research to make sure the sale is legitimate.

And who knows, if the sighting at the Oscars makes the demand is high enough, perhaps Nike will consider another raffle to raise more money for the Michael J. Fox Foundation. That'd be the ideal situation for everyone involved.