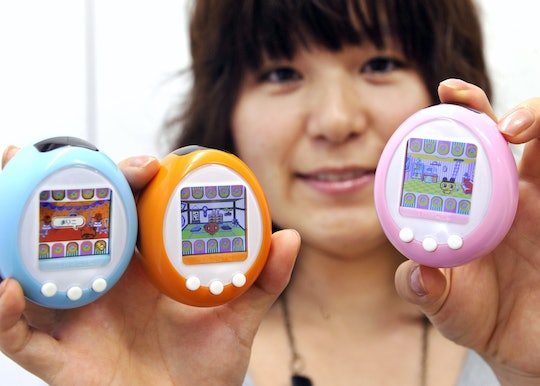 In the late '90s, my parents were not fans of my Tamagotchi. That's because they had to bring my tiny pixelated pet to work while I was at school to feed it, play with it, and clean up its poop or else it would be on a fast track to its digital grave. So, it's safe to say they weren't especially torn up when it did die of neglect and was eventually relegated to a junk drawer. But, now, millennial parents can get ready to lug that egg-shaped shell around with them, because Tamagotchis are back. Let's be real, though, and admit that adults are going to be the ones desperate to know where to get Tamagotchis this go-round, not the iPad-obsessed kids of the 21st century, because this is the ultimate nostalgia item.

Bandai, the company that masterminded the classic Tamagotchi in 1997, first unleashed the virtual pet for is 20th anniversary resurgence in its native Japan earlier this year, according to HelloGiggles. And the good news for American children of the '90s is that the best, neediest pet you ever had is now about to beep itself back into your heart (and annoy the crap out of you) just like old times. So, get ready to ditch that iPhone, because, if you act now, your brand-new Tamagotchi will be greeting you like a long lost love before you know it.

The new Tamagotchi — which is 1.5 inches tall and 1.25 inches wide, smaller than the original and doesn't offer users the chance to bond with their pet by playing games — will be back for its American encore on Nov. 5. But its 2017 rollout will result in only "limited quantities" of the miniature devices being available to the grown-up kids who will likely be the ones clamoring for them, so it's probably a good idea to pre-order if you have you heart set on once again experiencing the thrill of taking care of your Tamagatchi and feeling that lukewarm apathy when it inevitably dies.

With a suggested retail price of $14.99 the Tamagotchi was officially ready for pre-order Oct. 10. To do that, Amazon is the obvious choice, as it carries all six of the shell designs. Toys "R" Us is also selling the pocket pets ahead of the release date, and will even sell you the Tamagotchi Friends Deluxe Playset and the Tamagotchi Friends Dream School Pack if you need to address your newfound craving for all things Tamagotchi right now.

And who knows: If supplies don't run out, maybe you'll be able to walk into an actual, physical toy store and experience the feeling riding home itching to rip the packaging off and get to playing. It would only be fitting to pay for it with your allowance, too

Of course, carrying around a Tamagotchi now, as an adult, is not more practical than it was when we were 8 years old. The egg-shaped shell with the now low-tech square screen and old-school buttons that you actually have to press admittedly don't do much. Not only that, but you can download the full-fledged Tamagotchi game to your phone from the app store for the low price of 99 cents.

But the app won't come with a handy chain so that you can attach the Tamagotchi to your bag. It won't enthrall your friends and send them on a trip down memory lane. And it probably won't make your kid shake their head in disgust at just how lame you are, which is maybe the whole point.

So, go ahead and pre-order a Tamagotchi or two. You know you want to.