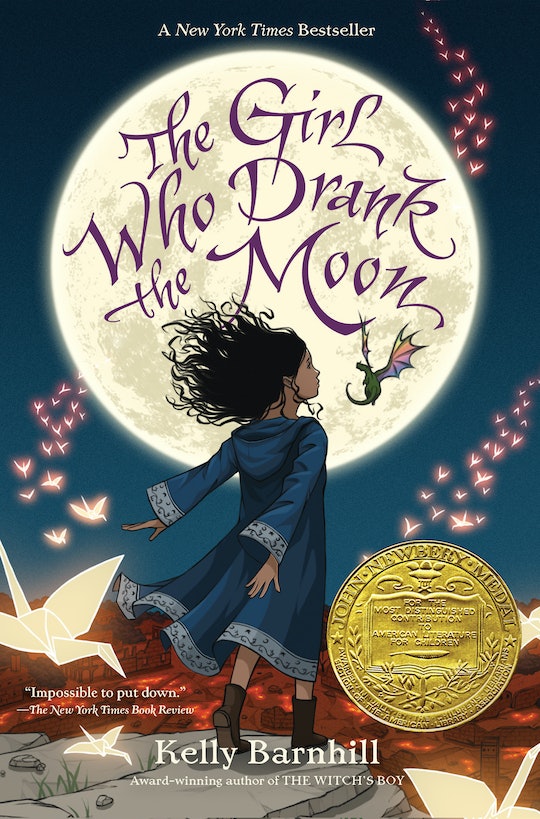 Where To Get 'The Girl Who Drank the Moon'

If you write children's books, winning a Newbery Medal is probably on your bucket list — it's the nation's highest award for children's literature — but this year, Kelly Barnhill will be the one who gets to mark it off. On Monday, it was announced that Barnhill won the 2017 Newbery Medal for her book, The Girl Who Drank The Moon, and unsurprisingly, it's a book that's in high-demand. Wondering where to get The Girl Who Drank The Moon? You have lots of options.

The Girl Who Drank The Moon follows the story of a young girl named Luna, who, according to The Washington Post, is mistakenly given magical powers as a baby by a witch who was trying to rescue her. As she grows, and her magic emerges, Luna must learn how to deal with her accidental gift, and how to avoid the disastrous consequences that could occur.

The Girl Who Drank The Moon is the latest young adult novel from Barnhill — who also wrote, The Witch's Boy, The Mostly True Story of Jack, and Iron Hearted Violet — but the Newbery Medal is far from being the book's first accolade. According to Amazon, since its release in August 2016, The Girl Who Drank The Moon has made The New York Times Bestseller List, was named one of Entertainment Weekly's best middle grade books of 2016, as well as a "Best Book of 2016" by the New York Public Library, the Chicago Public Library, Publishers Weekly, and School Library Journal. It was also named as the 2017 Booklist Youth Editors' Choice.

Although Barnhill is enjoying a great deal of success as a writer, it's not her only job. According to The Minneapolis Star-Tribune, Barnhill also teaches arts education in Minnesota, and on her own website, she describes herself as "a former teacher, former bartender, former waitress, former activist, former park ranger, former secretary, former janitor and former church-guitar-player." In addition to the Newbery Medal, Barnhill has also been honored by the Jerome Foundation, the Minnesota State Arts Board, and was announced as a 2015 McKnight Writing Fellow, according to The Star-Tribune.

Given the praise lavished upon the book, it seems pretty safe to assume that it would be a good choice for young readers. But for parents looking for more information, Common Sense Media gave The Girl Who Drank The Moon five stars, with high ratings for having positive messages and role models. Describing the book as "an expertly crafted fantasy with spiritual undertones and a strong female protagonist," Common Sense Media declared it a "great choice for middle-grade fantasy lovers," ages 10 and up.

The Girl Who Drank The Moon is available from Amazon in both hardcover and paperback editions, as well as in Kindle format and as an audiobook, narrated by Christina Moore. Barnes & Noble also has the book for sale in hardcover, as well as a NOOK e-book version, and digital versions can be downloaded on Mac or iOS devices through iBooks or iTunes, and on Google Play for Android devices.