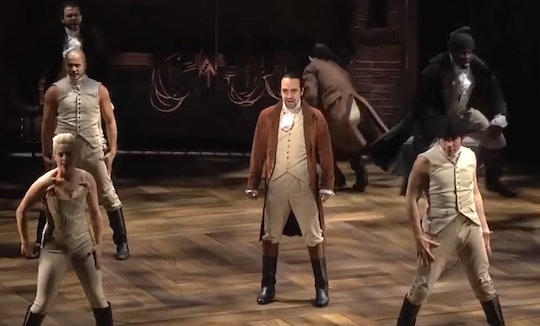 Hamilton the Musical Montage from the Public Theater

Where To Get The 'Hamilton' Soundtrack, Because The Cast Is Too Epic

The 2015 Grammy Awards are going vintage. The cast of Broadway's Hamilton will add history-fueled hip hop to the show, marking one of the few times the Grammys have spotlighted musical theater onstage. It's a treat for the thousands of fans who haven't been able to score seats to the show, which tells the story of founding father Alexander Hamilton. Assuming Monday night's Grammy number leaves people wanting more, where can you get the Hamilton soundtrack?

The Hamilton soundtrack is available for $19.99 on iTunes. Individual tracks are $1.29, but it definitely helps to listen to each song in context. If you want to get a taste of the best musical theater album nominee before making a purchase, the whole album is available to stream on Spotify.

The Grammys may be in L.A., but the Hamilton cast will perform from its home at New York's Richard Rodgers Theatre, according to USA Today. They'll be the first Broadway show featured since Green Day's American Idiot in 2010. For creator Lin-Manuel Miranda, it's a thrilling opportunity:

We're going to do the opening number, scream with joy, and then celebrate the fact that we were just on the Grammys. Best night ever.

Hamilton still has competition in its category. Fellow musical theater Grammy nominees include An American in Paris, Fun Home, The King and I, and Something Rotten!, according to Playbill. But if the winner were determined by fan fervor alone, Hamilton would probably have the category locked up. In October, Billboard reported that the Hamilton cast album debuted at No. 12 on the Billboard 200 chart. It hit No. 1 on the Cast Albums chart, and it even earned the third spot for Rap Albums. It had the second-biggest sales debut for a cast album since 1991, and it charted higher than any other cast album since 2011, when The Book of Mormon released its recording.

Right now, getting a ticket to Hamilton is nearly impossible. The show is sold out through the end of the year, leaving many fans to participate in ticket lotteries to try to secure seats. The lotteries have become such an occasion that Hamilton started supplying entertainment to fans waiting outside the theater: Ham4Ham brings Hamilton cast members together with other New York celebrities to showcase everything from music to juggling. Fans got a special treat on Valentine's Day when Sesame Street's Elmo joined actor Christopher Jackson to sing a song from the musical, according to Entertainment Weekly.

Both ticket lottery veterans and those who haven't heard one song from the musical can expect tonight's Hamilton performance to leave them hooked. History has never sounded so good.