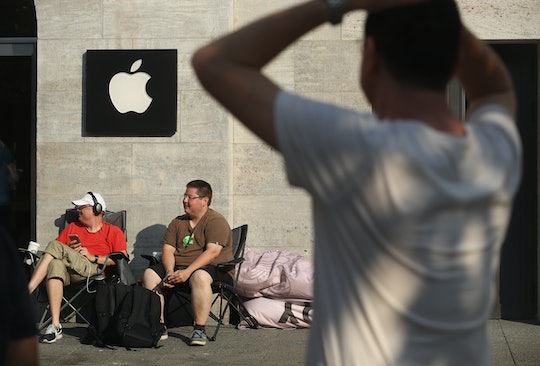 Where To Get The iPhone 7, Now That It's Sold Out

If you were looking forward to scoring a new jet black iPhone 7 when they hit the stores on Friday, bad news. They're already sold out. All of them. Also sold out are all of the iPhone 7 Plus models. So where can you get the iPhone 7, now that the majority of them have all been snatched up by those lightning-fast Apple super-fans?

Turns out that all of those folks camped out and waiting in line might make it into the store on Friday and be bitterly disappointed. The only thing eager Apple junkies eager for either a Plus or a jet black model can do in the store is place an online order. "We sincerely appreciate our customers' patience as we work hard to get the new iPhone into the hands of everyone who wants one as quickly as possible," Apple spokeswoman Trudy Muller told NBC News in a statement.

NBC added that Apple typically releases the first-weekend sales numbers of their new gadgets, but this time has decided to skip it. NBC news said that the empty shelves at Apple stores could be more a reflection of limited supplies of iPhone 7 models, rather than rabid demand.

In a statement, Apple announced that it was pleased with the initial consumer response, and reassured customers that it would be re-supplying vendors as quickly as possible:

We couldn’t be happier with the initial response to iPhone 7 and iPhone 7 Plus, and we are looking forward to beginning sales through our retail stores and partners around the world. Beginning Friday, limited quantities of iPhone 7 in silver, gold, rose gold, and black will be available for walk-in customers at Apple retail stores. During the online pre-order period, initial quantities of iPhone 7 Plus in all finishes and iPhone 7 in jet black sold out and will not be available for walk-in customers. Availability at partner locations for all finishes may vary and we recommend checking directly with them. Customers can continue to order all models in all colors on apple.com. We sincerely appreciate our customers’ patience as we work hard to get the new iPhone into the hands of everyone who wants one as quickly as possible.

Across Australia, employees broke the news about the lack of inventory to folks who waited in line to make their iPhone 7 purchase, according to 9 to 5 Mac. To make up for the lack of stock, they were handing out gift cards for $75 at the Sydney Apple location.

For now, it looks like iPhone fans might just have to sit tight until their local retailer or Apple store is able to catch up on re-stocking the newly minted models — or at least play a few dozen games of "Pokemon Go" on their old models while they wait.