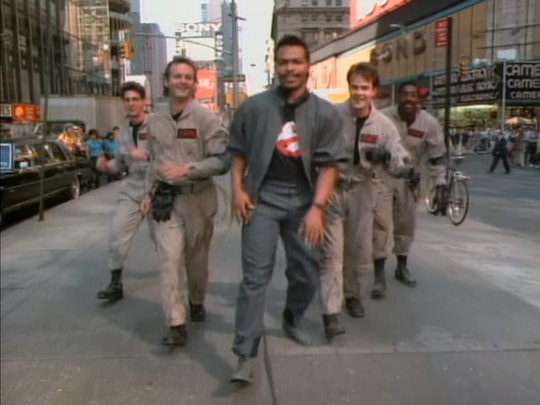 Where To Get The Original ‘Ghostbusters’ Soundtrack, Because Ray Parker Jr. Is Amazing

My son's been obsessed with Ghostbusters since he was 2 years old. Though he was far too young to see the full movies, I'd shown him the Stay Puft Marshmallow man scene on YouTube at least 100 times (always coughing to drown out Winston saying "Oh, sh*t," because I'm a good mom). He's now 7, and after I gleefully showed him the first trailer for the reboot, his first response was, "I don't like that they changed the song." You and me both, kiddo. And I'm sure we're not the only ones wondering where to get the original Ghostbusters soundtrack, because with all due respect to Missy Elliott (seriously, so much, love you, girl), Ray Parker, Jr. got it right the first time.

The good news is that fans can still pick up the original soundtrack on iTunes, CD or stream it free through Amazon Prime, and it is an absolute delight, and a true snapshot of early '80s pop. The title theme was No. 1 on the charts for three weeks and was nominated for an Oscar, losing only because Stevie Wonder exists. Add in Laura Branigan, Air Supply, and the Thompson Twins, and the album became the soundtrack of the summer of 1984. And that video! Dear readers, if you can spare four minutes, you absolutely must watch this video that perfectly encapsulates what the '80s were about: Ghostbusters, neon, and George Wendt, for some reason.

I understand Sony's position that the song needed an update to appeal to the kids, but take it from my actual kid — it really wasn't necessary. In 100 years, if one of our robot overlords shouts "Who you gonna call?" in a crowded room, the response will be a loud and proud "Ghostbusters!" It's a classic. In two years, nobody will remember whether or not Fall Out Boy was afraid (for the record, they claim that they are not).

Luckily for fans, much in the same way that the reboot has not magically destroyed every single copy of the original movie, the new soundtrack hasn't erased the original, either, and fans are free to blast it from their cars on the way to and from the theater this Friday. And I'm sure Ray Parker, Jr., who's been a real class act regarding the new song, according to the A.V. Club, won't mind when all those residual checks come pouring in soon. You've earned them, buddy.