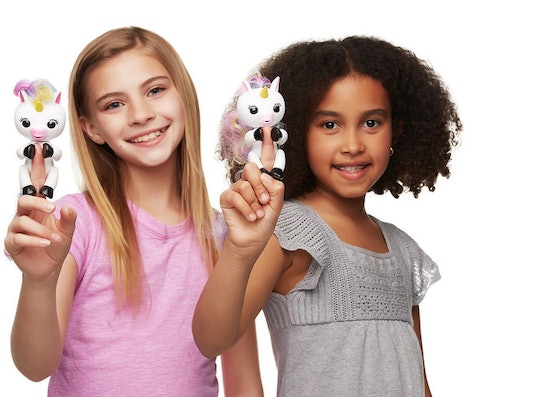 Where To Get Gigi The Unicorn Fingerling, Because She's Selling Out Everywhere

Beanie Babies. Trolls. Tamagotchis. Hatchimals. Every year, there's a hot new toy that enters the market that causes kids to run screaming to their parents. Stores become packed with tired moms and dads looking to buy the latest toy craze to the delight of their children. This holiday season, it seems parents will be standing in line to snag the Fingerling, a tiny robotic critter that — you guessed it — hugs your finger. The monkey Fingerlings have made a big splash, but now it's Gigi the Unicorn everyone wants. So where can you get the unicorn Fingerling? Online and in-stores, but you may have to wait awhile or pay a higher price.

According to Money, Gigi the Unicorn hit Toys "R" Us shelves last week in a limited release by WowWee, the company that makes Fingerlings. The unicorn Fingerling, exclusive to the major toy store chain, sold out quickly in the United States, and is now hard for collectors and consumers to find, Money reported. But if you're in need of Gigi the Unicorn Fingerling, which retails for $14.99, you can sign up email alerts on Toys "R" US website for when the product is back in stock and available for purchase.

Romper reached out to Toys "R" Us to find out when the stores would be restocking Gigi the Unicorn. A spokesperson responded,

For shoppers looking to cross this must-have off their wish list, they should check online at Toysrus.com or with their local Toys “R” Us store often, as we will continue to receive additional Fingerlings (including our exclusive, Gigi the Unicorn) all holiday season long.

You could visit a third-party seller to get your hands on Gigi the Unicorn, but expect to pay a hefty price for the popular toy. Collectors on eBay are selling the exclusive product upwards of $65, although bidding wars have the potential of pushing those numbers higher. Sellers are Amazon have also hiked up the price for Gigi the Unicorn, with some listings going for $125. If you do the math, you'll realize that's nearly nine times the original retail price.

Of course, price gouging on "the hot holiday toy of 2017" is to be expected, especially if said toy has been out of stock for a while. After all, Beanie Babies, made by Ty Warner Inc. in the 1990s, fell into that trap, even though experts say they're no longer valuable.

It's too early to tell if the Fingerlings will suffer the Beanie Babies' fate. But for now, the animatronic creatures are making kids across the country jump for joy. And it seems the makers behind the Fingerlings wouldn't want it any other way.

According to Business Insider, when WowWee launched the Fingerlings back in August, they wanted to play and learn in a "fun and innovative" way that's right for them. Sydney Wiseman, WowWee's brand manager, told Business Insider last month,

Fingerlings are like having an interactive friend at your fingertips - they're impossible not to love! We have been so excited by the positive response across the UK and Canada and we can't wait to see the reaction in the U.S. It's definitely a highly anticipated launch.

WowWee also used the Fingerlings as a way to support charity. The company donated $1 from every Fingerling sold in its first week to the nonprofit WildAid, which protects wildlife and fights illegal wildlife trade.

Gigi the Unicorn is not the only Fingerling in town, though. WowWee first launched its line of finger-hugging creatures as baby monkeys. Those little critters are still available for sale on Amazon, Walmart, Toys "R" Us, and Target. But hurry up and grab one before they're all gone.