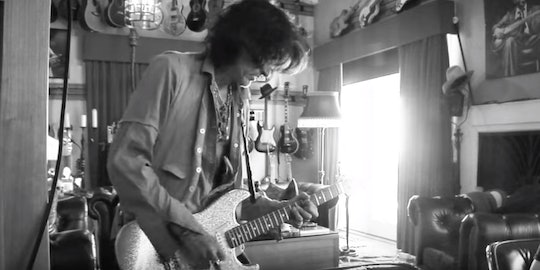 Where To Listen To Hollywood Vampires, Because We All Need To Immediately

With the 58th Annual Grammy Awards nearly upon us, many are wondering where to listen to Hollywood Vampires, the star-studded rock supergroup that will perform on live television for the first time at the Grammys. That's quite the venue for a band's first televised gig, but considering Hollywood Vampires' members — actor Johnny Depp, rockstar Alice Cooper, Aerosmith lead guitarist Joe Perry, and Guns N' Roses bassist Duff McKagan — the Grammys actually seems rather appropriate.

Hollywood Vampires was formed in 2015 by Cooper, Depp, and Perry to honor the great musicians of the '70s who attended a Los Angeles-based drinking club likewise called Hollywood Vampires. “We didn’t drink the blood of the vein, but the blood of the vine,” Cooper said in 2015, according to Entertainment Weekly. Given the busy schedules of the band's members, it's unsurprising that their tour dates haven't exactly been extensive. Their first and only U.S. show, in Los Angeles, was way back in September, the same month they released their self-titled debut album, which consists mostly of covers of classic rock hits like "Brown Sugar" and "My Generation," according to Rolling Stone.

For those of us interested in seeing Hollywood Vampires live (that's everyone, I assume), the next chance won't be until July, when the band will appear at the 2016 Rock Fest in Cadott, Wisconsin. The festival dates are July 14-16, but it hasn't been announced what days Hollywood Vampires will play.

If a summer trip to Wisconsin isn't on your schedule, fear not, because on Friday, Hollywood Vampires will release a deluxe digital version of the band's debut album, according to Rolling Stone. The album will stream on Spotify, and will be available for purchase on iTunes and Google Play. The re-release includes three songs that weren't on the original: a cover of "I'm a Boy" by the Who; a cover of Love's "7 and 7 is;" and a Hollywood Vampires original, "As Bad As I Am," which the group is planning to sing at the Grammys.

If you're not keen on purchasing the album on iTunes (you know who you are!), many of Hollywood Vampires' songs and live performances are easily searchable on YouTube, including an audio-only version of their album, below — though you'll need to watch a few ads.

Listening on YouTube can tide everyone over until Hollywood Vampires' widely-anticipated performance at the Grammys. And if Depp wears his Pirates of the Caribbean-inspired outfit, as he did at a previous Hollywood Vampires gig, that alone will be reason enough to watch.