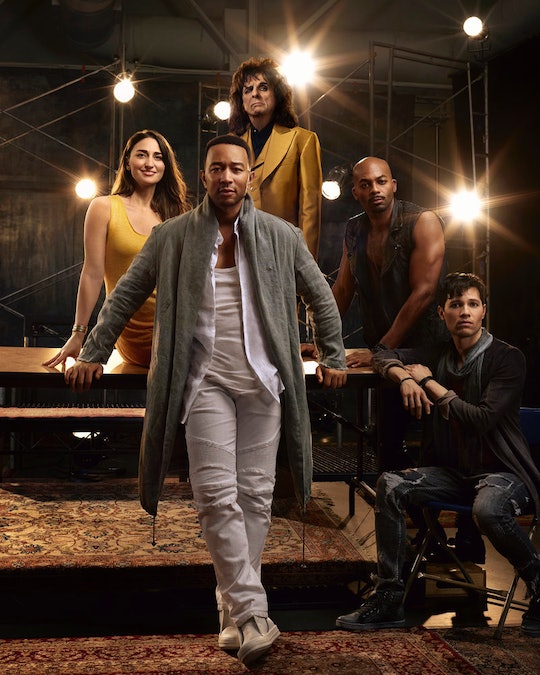 Here's Where You Can Listen To The 'Jesus Christ Superstar Live!' Soundtrack

If you’re like me, then your parents definitely made you watch Jesus Christ Superstar at a young age, even if you didn't quite understand or appreciate it until much later. That being said, the music from the musical stands the test of time, which is probably why NBC chose for it to be the network's next big production that will air appropriately on Easter Sunday (April 1). Given how catchy the songs are, viewers are going to want to know where to listen to the Jesus Christ Superstar Live! soundtrack, so they can relive the story again and again.

Fans of the original Andrew Lloyd Webber and Tim Rice rock opera will be happy to know that the track listing hasn't changed for the televised event, though as to be expected, the stars are more contemporary. According to Playbill, the soundtrack for Jesus Christ Superstar Live! will be released digitally on April 6 and then be available for CD purchase starting on April 20. Until then, however, fans can probably watch clips from the special online as they become available after the live show airs.

Just as the original Broadway play did in 1971, Jesus Christ Superstar Live! will take place in a more present-day world, while still following the story of Jesus of Nazareth and his followers. Rehearsals have already begun at Marcy Armory in Williamsburg, Brooklyn, New York, and John Legend will play Jesus, with Sara Bareilles as Mary Magdalene, Brandon Victor Dixon (Hamilton) as Judas and Alice Cooper as King Herod. "Musically, we’re going to stick pretty close to the original," Legend told Playbill. "But visually we want to update it and refresh it. The set design and costume design are all meant to connect the present to the past a little more."

In the past few years, it’s become common for networks to air live specials of popular musicals or movies that were turned into musicals, but with this one airing live on Easter, it’s more of a concert being broadcast live with an entire audience in attendance at the actual show.

Still, it’s a major event for those who are fans of the original and who are ready to hear new voices sing some of the epic songs from the soundtrack. The physical album will contain two discs and a full track listing of 27 different songs from the musical. Before the special event airs, though, you can already pre-order your digital copy from iTunes, Amazon, and Google Play.

While in the past, other live TV musicals like Grease: Live, The Sound of Music Live!, and Hairspray: Live! have been more like live productions of mini-movies, Jesus Christ Superstar Live! is going to not only be broadcast from an actual concert stage, but also contain a full band on the very same stage in order to properly play along with the actors.

There are also going to be totally unique costumes designed specifically for the live concert event. "Oh, wait ‘till you see them," Norm Lewis, who plays Caiaphas, told BroadwayWorld.com. "I actually did a fitting the other day with the stuff that was already prepared, and I want to take it home! I actually want to buy it. It's beautiful! The costumes are made of recycled plastic bags." Erik Gronwall, who plays Simon Zealotes, revealed that the costumes are "very punk. Imagine the Sex Pistols... and Jesus." I mean, I’m partial to the bell bottoms and bare feet from the movie, but they still sound amazing.

Jesus Christ Superstar Live! will air on April 1 at 8 p.m. EST on NBC and the soundtrack will be made available to fans just days later, so you won’t be waiting too long until you’re able to sing along with Legend once again.