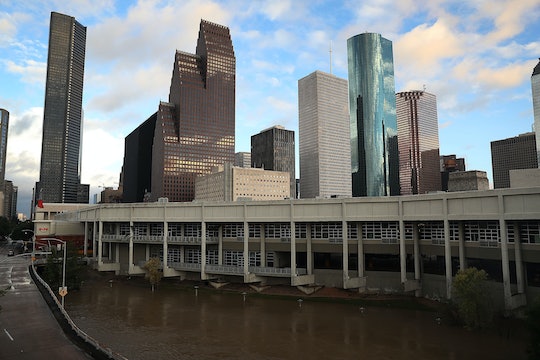 Here's Where To Park For The Women's March In Houston

Since January 2017, women across the country have come together to march in solidarity against bigotry, oppression, racism, sexism, and join their voices in a chorus of support and intersectional awareness. It's an amazing experience, and one not soon to be forgotten. However, it's a bit of a logistics nightmare. Cities like Houston have historically had huge turnouts for these marches, and for commuter cities like the those in South Texas, access to parking is incredibly important. Finding where to park for the Women's March in Houston is a bit of a trick, but it turns out there are plenty of spots open.

According to organizers, there will be plenty of parking reasonably close to the start of the march, near Houston's theatre district, and surrounding Sam Houston Park. Any Texan will tell you that parking downtown is at a premium, but thanks to the sheer number of cars in the city, there are dozens of multi-level lots in and around downtown, and with the city's massive fleet of taxis and complex bus system, you can park further away and take a reasonably-priced bus or metrorail nearer to the march than you're probably expecting.

The organizers have pointed to a few specific lots they feel would be the best bet for attendees to use. They are the Theater District Garage (Tranquility 1) on 511 Rusk St, the 1100 Smith Parking Garage which has 13 levels of paid parking and is accessible from Smith Street, Municipal lots C and H off of Memorial Drive and Houston Avenue, and there is accessible parking "available in public surface lots downtown and there are several meters designated for accessible parking on nearby blocks surrounding City Hall. These are always free without a time limit. Vehicles with disability placards can also park at standard meter spaces for up to three hours free."

As a New Yorker whose parents live in Southeast Texas, I find that I am always quite jealous of the ample parking and inexpensive metrorail and bus fees. The City of Houston has made tremendous improvements to their mass transit over the years, and yet a one-way ticket on their system is still only $1.25. A trick that New Yorkers do in these instances is to carpool and park in a less densely populated area, like just inside of the Gulf Freeway Loop at the garage on 600 Jefferson, and then take a train, taxi, or bus to the destination. This way, your parking is cheaper, and you beat the crowds.

Most us have been there — that interminable loop around block after block looking for parking for a big event. It's a drag on every good feeling you've cultivated in anticipation of going out. I know that it makes me irrationally angry, but thankfully, figuring out where to park for the Houston Women's March doesn't look to be the most frustrating of endeavors. However, it will cost you. Some of these lots can run upwards of $15 per day, according to DowntownHouston.org.

The march begins near the Cistern and Waterworks, so if you want to park near to that, you'll want the Hobby Center garage at 800 Bagby, and it will run $15 per day. However, they only have 800 spots, so you would want to get there far in advance of the 8:00 a.m. starting time to secure a good spot. I suggest bringing breakfast and making a whole to-do out of it.

I mean, seriously, Houston has breakfast tacos everywhere. I would always bring breakfast with me if I had those nearby. It's the perfect march fuel, and at least you'll have a spot.