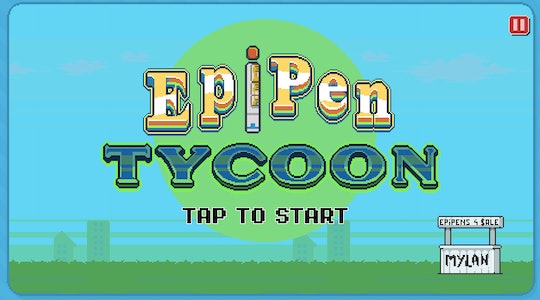 If you're still angry about the cost of prescription drugs and the complex (to say the least) business practices of pharmaceutical companies, knowing where to play EpiPen Tycoon might be the best medicine ever to relieve your frustration. Yes, some genius has created a browser game you can play on your desktop where you become Heather Bresch, the embattled CEO of Mylan, and try to make as much money as humanly possible selling EpiPens to customers. It's pretty genius.

Yes, in the game, you're the CEO of Mylan and you only have to do a few things. You can raise or decrease the price of an EpiPen by $5 or, in the case of a public relations crisis, try to appease the public and your customers by giving them coupons and rebates. The goal is to keep raising your salary and there's even a little "outrage meter" that measures the mood of the "Public" and your company's "Investors." Meanwhile, little, digital customers come to the Mylan HQ sick with allergies.

The game's simplicity is amusing in a very sad way. It's almost funny until you realize that the game is a perfect reenactment of the scandal surrounding Bresch and Mylan this month. That the pharma company's scandal has been gameified only adds to the satire. (Because when it comes to prescription drug prices, it's apparently all a game.)

Mylan came under scrutiny this month when it was reported that the company has consistently raised the price of its EpiPen from $100 to $600 since 2008. The company has said that the price increase is due to costs to produce the product and blamed the healthcare system as a whole for the rising prices. The company also said that most of its customers are insured and that there has been a $100 coupon doctors give patients to reduce the cost of their co-payment, so that the payments aren't so high. But the public doesn't seem to be buying it.

In response to the public outcry, Mylan announced that it would start distributing a generic version of the device and issue a coupon for $300. But exactly where the money goes is still really confusing to most consumers. The high cost of the drug and the coupons or rebates given to patients don't necessarily mean that the pharmaceutical company makes less money. In fact, it continue to profit.

Insurance companies, the government and employers still bear the burden of these excessive prices. In turn, those costs are eventually passed on to consumers in the form of higher premiums.

Although moves are being made to call out bad pharma prices, it's not likely the issue will be resolved anytime soon. Your best bet for now is to play EpiPen Tycoon and hope for the best.