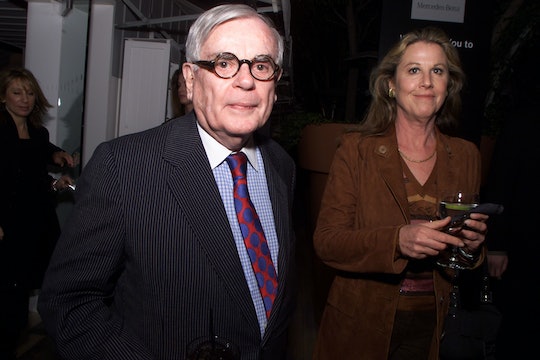 Where To Read Dominick Dunne's Vanity Fair Articles About The O.J. Simpson Trial, Because All 'American Crime Story' Fans Should

Given the runaway success of the FX television series The People v. O.J. Simpson: American Crime Story, many are wondering where to read Dominick Dunne's Vanity Fair articles about the O.J. Simpson trial. The articles are, after all, a goldmine of information. Dunne, the prolific American novelist and journalist who died in 2009, covered the Simpson trial from the first day in the courtroom, and his eloquent, dramatic, first-person accounts of what he saw captivated the American public.

Happily, Dunne's articles are readily available at Vanity Fair's website. In fact, the folks at Vanity Fair have been kind enough to compile them all together for our reading pleasure. Dunne has, posthumously, become the object of curiosity not only because his articles shine light on the O.J. Simpson trial, but because he's also a character in American Crime Story, portrayed by actor Robert Morse. In a review at Vulture, TV critic Matt Zoller Seitz even went so far as to claim that Morse's performance was one of the series' finest. According to Seitz, Morse portrays Dunne as a journalist "so desperate to be the Truman Capote of the ’90s that he’ll treat the murder victims as scandal-sheet items just to hold court at a dinner party."

When the real Dunne covered the Simpson trial in the mid-'90s, he was already a veteran to courtroom dramas, as Dunne's own daughter, who played the little girl in Poltergeist, was tragically murdered in 1982.

Dunne subsequently became obsessed with covering murder trials, and many of his novels were based on real-life murder mysteries. But it was the Simpson trial that made him famous. “I had a literary following before, but because of O. J. I became a name and a public person, which I love,” Dunne told The New York Times in 2008.

In 1997, Dunne released Another City, Not My Own, a novel based on his own coverage of the Simpson trial. The book features Gus Bailey, a journalist who is a thinly-veiled alter ego to Dunne. At the time, Dunne's fiction/fact hybrid novel infuriated some book critics. The novel contained ambiguously truthful gossip about real-world celebrities, so some wondered if Dunne's Vanity Fair columns were ambiguously truthful as well.

In a sense, Dunne's fictionalized version of the Simpson trial was a precursor to American Crime Story, which is based on real events but not a documentary. For viewers who want to brush up on the "facts" of the trial, Dunne's Vanity Fair articles are certainly an excellent place to start.