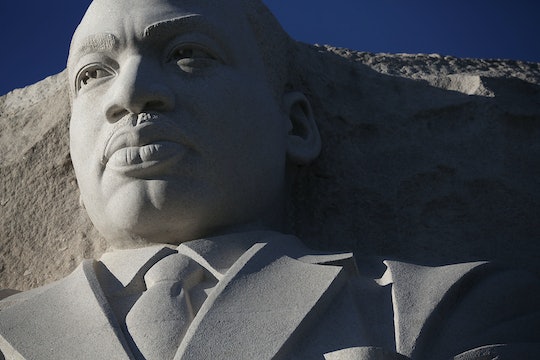 This MLK Jr. Letter Should Be Required Reading

King wrote the letter after being arrested for nonviolent resistance in response to segregation in Birmingham, Alabama. When eight white clergymen wrote a statement criticizing his methods for being "untimely and unwise," advising King and his compatriots to wait and let the courts fight racial segregation, King fired back from his jail cell, writing on scraps of paper and defending the necessity and the urgency of nonviolent resistance. The version you probably grew up reading in class was likely condensed. (As King himself wrote at the end of the letter, "Never before have I written so long a letter... I can assure you that it would have been much shorter if I had been writing from a comfortable desk.")

But you can read the full version of Letter from Birmingham Jail here, and it's worth it.

King's words ring especially true in today's divided political climate, in which marginalized groups fear what may happen to them over the course of the upcoming administration. And King's letter provides a reminder that, even if one is not directly affected by actions that may hurt more vulnerable groups, one still has a responsibility to stand up for justice. After all, as he wrote,

Injustice anywhere is a threat to justice everywhere. We are caught in an inescapable network of mutuality, tied in a single garment of destiny. Whatever affects one directly affects all indirectly.

Furthermore, in the wake of controversy and misunderstanding surrounding the Black Lives Matter movement, it's worth re-reading about King's disappointment with "the white moderate," who he said,

"... is more devoted to 'order' than to justice... who constantly says: 'I agree with you in the goal you seek, but I cannot agree with your methods of direct action' ... who lives by a mythical concept of time and who constantly advises the Negro to wait for a 'more convenient season.' Shallow understanding from people of good will is more frustrating than absolute misunderstanding from people of ill will.

On this holiday, it's worth it to dig a little deeper than those segments from King's "I Have A Dream" speech that everyone knows. So let's take some time to read King's letter in full and then, with King as a guide, figure out how to move forward in the fight for true equality.