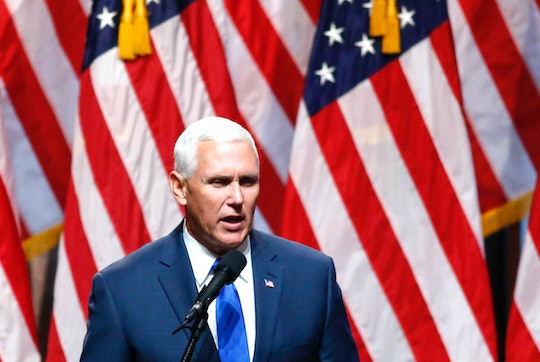 Where To Read Mike Pence's 'Smoking Doesn't Kill' Op-Ed, Because It Is Horrifying

Republican presumptive nominee Donald Trump picked a rather controversial vice-presidential candidate to run with: Indiana Gov. Mike Pence has questioned global warming, shied away from evolution, and claimed that abortion-inducing drugs can be "very dangerous." On top of that, BuzzFeed recently unearthed an op-ed Pence wrote in 2000, revealing his belief that that "smoking doesn't kill." He is clearly a man of science, people — and if you want the proof, here's where to read Pence's "Smoking Doesn't Kill" op-ed for yourself.

Unfortunately, Pence's smoking op-ed — and many of his other controversial pieces — were originally published on his website, which has long since been revamped. However, your parents were right when they said that everything you put on the internet will be there forever (shudder). Thanks to the powerful memory of the internet, there are web archives of Pence's website — and his essays.

In the piece, creatively titled "The Great American Smoke Out," Pence argued against taxing tobacco, warning the public of a "government big enough to protect us from our own stubborn wills." In his own words:

Time for a quick reality check. Despite the hysteria from the political class and the media, smoking doesn't kill. In fact, 2 out of every three smokers does not die from a smoking related illness.

Pence's office did not immediately respond to Romper's request for comment regarding the op-ed.

One might argue that, hey, Pence's piece was written 16 years ago. But the Surgeon General of the U.S. Public Health Service first warned against smoking 50 years ago, and information about the dangers of smoking have been growing ever since. (Not to mention the fact that smoking-induced illnesses cost the United States a whopping $170 billion a year, which accounts for 8.7 percent of the country's annual healthcare spending.)

Shortly after Pence's op-ed was published online, Pence confirmed that he had been rewarded for his beliefs. According to Think Progress, Pence received thousands of dollars in campaign contributions from tobacco companies before he made it to Congress, a trend that continued throughout his time there. (Oh, and his family business at the time, Kiel Bros. Oil, also ran a chain of stores called Tobacco Road that sold gasoline and, surprise, cigarettes.)

Pence may have written his smoking op-ed in 2000, but being pro-tobacco is a position he still holds when it comes to legislation. In 2013, he cut Indiana's budget for smoking prevention and cessation programs; in 2015, he made it easier to open cigar bars in the state; and in February, he opposed cigarette and gas tax increases intended to fund improvements in Indiana's infrastructure.

Click on the following link to read Pence's op-ed on smoking. If you're interested, he also wrote about his views on global warming and Bill Clinton's presidency.