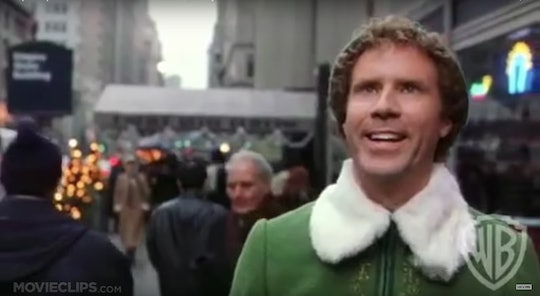 If You Need Your Buddy The Elf Fix, Here's How To Watch 'Elf' This Holiday Season

With Thanksgiving behind us, it's finally time to start preparing for the rest of the holiday season, and what better way than to curl up watching some classics? Everyone has their own personal list of movies to watch during the holidays, but you can't doubt that Elf is a holiday classic. If you don't have it stashed in your DVD collection, no need to worry. There are a few places where you can stream Elf this holiday season. So get ready, get cozy, and grab all the sweets you can find.

It's hard to believe that it's already been 15 years since Elf was first released. This 2003 film following the story of Buddy, a man raised in the North Pole as an elf who heads to New York to find his new identity, as summarized by IMDb, is one that family members of all ages can enjoy.

Back in 2017, Fandago users even voted Elf as the best Christmas movie of the century. The love for Elf even extended past the big (or little) screen, when a Broadway musical version debuted in 2010.

If you don't have the DVD, Elf hasn't always been easy to find. As many fans are disappointingly familiar with, the full movie isn't on Netflix or Hulu right now, but no fear! There are a few ways to watch Elf this year.

To start, you can access Elf on Amazon. Unfortunately, the title isn't available to stream on Prime Video in the United States. That means, even if you're a Prime member, you do have to rent or buy Elf. Amazon lists the cost of renting the movie at $3.99 and buying it costs $9.99.

Notably, Elf is available on Prime Video if you're located in the United Kingdom. So, for any U.K. fans reading, that means you can stream it as many times as you want for free. And if you aren't a Prime subscriber already, sign up for a free 30-day trial!

Elf will also air on television this year. According to TV Guide, you can catch Elf exclusively on AMC at the following times in ET:

Since Elf is exclusively showing on AMC, that means you won't be able to watch it on television anywhere else this year. So be sure to pay attention to those dates and set your screen to record!

Luckily for fans, Elf has exploded into a phenomenon beyond the original film. That means you can still get into the Christmas spirit by tuning in to some of its other adaptions.

If you want to fully immerse yourself in the Elf world, you should also consider streaming Elf: Buddy's Christmas Musical on Hulu. This 2014 stop-motion adaption blends together aspects from the original film and the Broadway adaption.

Elf is regarded as a Christmas classic by many, so fans can't wait until it's easier to find during the holiday season. Until then, though, there are always at least a couple ways for people to tune in and collect their Christmas cheer with Buddy the elf.

More Like This
Scott Calvin Is Ready To Retire In The Santa Clauses Series Coming To Disney+
These Hocus Pocus Costumes Are Fit For The Whole Family, Even The Dog
The Addams Family Is Not Exactly As Kid-Friendly As You Remember
The Little Vampire Is Just Scary Enough