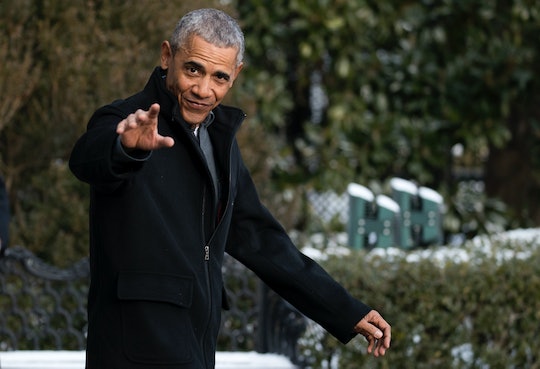 It feels impossible that President Barack Obama will be giving his farewell address to the public on Tuesday, Jan. 10. It would have been hard enough to say goodbye to Obama under normal circumstances after the eight years of hard work, compassion, and dad dancing he devoted to the United States of America, however, these aren't normal circumstances. As power is handed over to, perhaps, the most volatile president-elect in our nation's history, many Americans feel uncertain about our country's future under the Trump administration. President Obama will likely imbue his final speech with his signature sense of hope and optimism to reassure his constituents that we truly are stronger together. The speech will surely be one for the history books, so you won't want to miss it. If you can't catch it on your TV, you will be able to stream Obama's final address, as well.

The White House announced the president's farewell address on its Instagram account last week. Accompanied by a sweet photograph of President Obama first lady Michelle Obama looking out over the horizon, the caption read,

On Tuesday, January 10, I'll go home to Chicago to say my grateful farewell to you, even if you can't be there in person. I'm just beginning to write my remarks. But I'm thinking about them as a chance to say thank you for this amazing journey, to celebrate the ways you've changed this country for the better these past eight years, and to offer some thoughts on where we all go from here...I hope you'll join me one last time. Because for me, it's always been about you.

Continuing the tradition started by George Washington's farewell address, Obama will address the nation from McCormick Place in his hometown of Chicago, Illinois. His speech will take place at 8 p.m. CST (9 p.m. EST) and will be broadcast on all the major news networks, such as CNN, Fox News, MSNBC, and CSPAN. For the many Americans without televisions in their homes, the speech will also be available to stream online. The White House's official Facebook page and its website will both conduct a live stream of the farewell address.

The White House is also asking Americans to participate in the farewell address by using the hashtag #YesWeCan on their social media accounts. If there was one particular moment during Obama's Presidency that inspired or motivated you, the White House wants to hear about it. They've already starting asking people, including Leonardo DiCaprio, Kobe Bryant, and Tom Hanks, for moments that stood out to them. They put together a video highlighting some of these #YesWeCan moments, as well:

From being the first African-American president to putting America at the forefront of the fight against climate change, President Obama's legacy will live on for decades to come. His farewell address will no doubt instill in us the same hope that his freshman run for president did eight years ago. He'll take the stage one last time to inspire us, motivate us, and get us to say #YesWeCan, despite our concerns for the future.

You won't want to miss this.