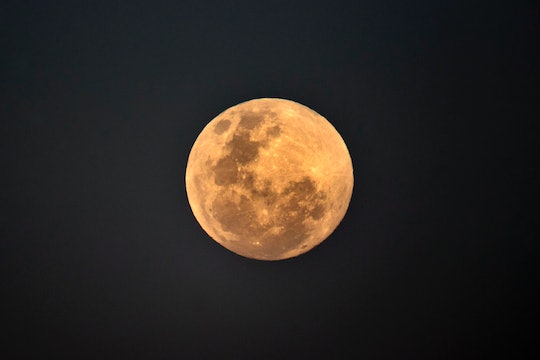 The Blood Moon Won't Be Visible In North America, But Here's Where You Can Stream It

My first introduction to the Blood Moon was while watching Practical Magic. It was an age of witchcraft and sorcery being a thing, so I started digging for more information about the celestial happening. Paired with my love of the wicked girls in The Craft (oh, the teenage years), I couldn't get enough. Which is why I'm pretty excited to relive the good ol' days when the longest Blood Moon eclipse of the century occurs this weekend. But because most North Americans won't be able to witness the event, I need to know where to stream the Blood Moon 2018 — because I'm not about miss out.

First, the details: This weekend's Blood Moon will begin overnight on July 27 and into the morning of July 28, "traveling across the sky beside each other while appearing to be separated by only five degrees, equal to the width of three middle fingers held at arm’s length," according to EarthSky.org. The total phase of the eclipse will last 1 hour, 42 minutes, and 57 seconds, the website noted. That's a big difference when compared to the shortest total lunar eclipse of this century, which occurred on April 4, 2015, and lasted 4 minutes and 48 seconds.

Bonus? This weekend also marks the closest Mars has come to Earth in 15 years, making for what National Geographic dubbed "a celestial double feature."

"Both the moon and Mars will dominate the overnight hours on July 27 and into the morning of July 28, traveling across the sky beside each other while appearing to be separated by only five degrees, equal to the width of three middle fingers held at arm’s length," the publication noted.

National Geographic added that at 1 a.m. ET (5:00 UT) on July 27, Mars will reach what astronomers call opposition. "This is when the sun, Earth, and Mars are aligned in a straight path, so that Mars appears to rise in the east just as the sun sets in the west, making the sunlit side of the planet visible all night long."

But don't expect to just run outside and spot the planetary shift. According to National Geographic, most North Americans will miss the eclipse because the moon will not have risen yet. But lucky viewers in South America, Africa, Europe, Australia, and Asia will get to witness at least partial phases of the happening.

But that doesn't mean you have to scrap your Blood Moon party plans just yet. If you want to take part in the event (but don't live in one of those spots), then you can check it out online via live webcasts from sites like Virtual Telescope and Slooh. The Royal Observatory in England will also be broadcasting the view from the Annie Maunder Astrographic Telescope on Facebook. The Bareket Observatory in Israel will also livestream the view from its telescope, and Sky Live TV — which will be broadcasting from Namibia — will stream the event in Spanish.

As for the superstitions often linked to the Blood Moon, experts say they're unfounded, but that doesn't stop people from feeling curious about them. Ancient civilizations believed there was something ominous tied to the occurrence, while other people think the opposite. My favorite is the legend of the Batammaliba people in Togo and Benin in Africa, who believe the lunar eclipse displays a conflict between sun and moon — one that people must help resolve. "It is therefore a time for old feuds to be laid to rest, a practice that has remained until this day," noted the Independent. Which is something this planet of ours could certainly use a bit of these days, am I right?