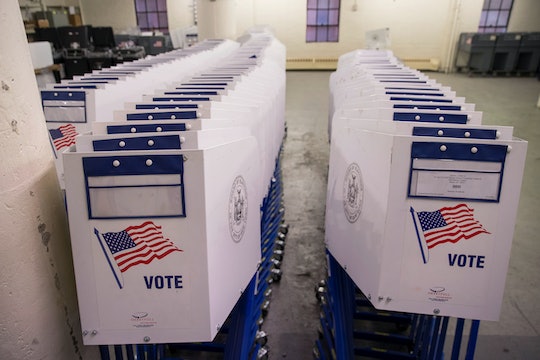 Where To Stream The Election Online, Because It's Going To Be A Night To Remember

Do you remember where you were when you first saw Bill Clinton frolicking in a sea of balloons at the close of the Democratic National Convention? Did you watch it live in your home, or at a viewing party at the local bar? Or were you stuck watching the gifs on Twitter the next day, because you don't have cable? It doesn't have to be that way; you can stream the election online for free, so the moment former Secretary of State Hillary Clinton becomes President-elect Hillary Clinton, you can watch her husband celebrate in full 1080p, not in some grainy loop on your smartphone.

CNET has reported that CNN, ABC, CBS, NBC and Fox will all be live-streaming the election coverage from their websites, free of charge. And Buzzfeed has teamed up with Twitter to stream live coverage, so if your phone is your only screen (the horror!), you can still tune in. Complex and YouTube are partnering for a live event called "Flex the Vote" that seems very hip and youth-oriented, and NBC News, PBS, MTV, Bloomberg, Telemundo, and The Young Turks will all stream live election coverage on YouTube, as well. Whether you like your election coverage delivered by stuffy people in suits, or something a little more hashtaggy, the internet has you covered.

Election coverage will begin at 7 p.m. Eastern Time, but the results likely won't be announced until 11 p.m., when the West Coast polls close. That's because of a long-held agreement between broadcasters not to call an election early and risk skewing the results. According to The New York Times, the networks called Ronald Reagan's 1980 win before all the polls had closed, and there were reports of some voters leaving the polls without voting as a result. This led to the network presidents being called into hearing before Congress, who blamed them for interfering with the election. Eventually, an examination of voter data revealed that there was no significant impact, but the media has played nice ever since.

Those who can't wait to hear the good (or terrible) news might want to open a second browser tab and pull up Slate, which will be partnering with a new app called Votecastr to report live election data from swing states as votes come in throughout the day, in an attempt to predict the outcome before TV's self-imposed reporting ban runs out. But you'll still want to stay up late, of course, because Bill's balloon party and Trump's inevitable non-concession speech cannot be missed.