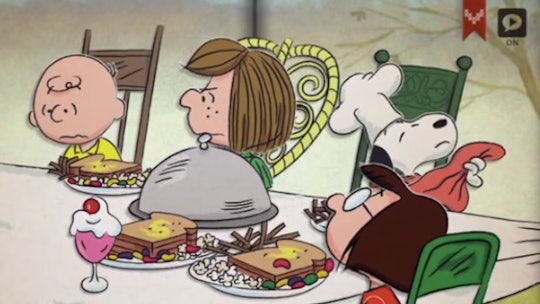 Look No Further: Here's Where To Watch 'A Charlie Brown Thanksgiving' In 2018

It doesn't always seem like wintertime to me unless there's an old-fashioned Peanuts cartoon about it. And, thankfully, the one in which Charlie, Snoopy, and the rest of the gang learn the meaning of November's upcoming holiday is airing on TV in just a matter of days. So, in 2018, here's where to watch A Charlie Brown Thanksgiving so you and your family don't miss out on this holiday TV tradition.

This staple of many of today's parents' childhoods will really take you back. From the zillion-second pauses between characters' speeches to the mix-up in which Snoopy cooks but Charlie Brown doesn't know what to serve for Thanksgiving and comes up with such snacks as popcorn, ice cream and toast, I know (and love) this movie pretty well already. Still, I can't wait to re-watch it with my kids this year.

But when the gang has to rally to recall the true meaning of the holiday — simply just being together — Linus recounts the history of the first Thanksgiving and Snoopy lends a hand by dressing up as a pilgrim.

This series of films recreated what the holidays mean so well for young people, I think, because the gang grapples with holiday preparations by themselves, without adult characters to interfere with kids' comprehension.

As for why this cartoon still resonates with viewers decades later, original executive producer Lee Mendelson told USA Today in 2015 that it has to do with a sense of tradition in the face of a cynical modern culture.

"Schulz said there's always a market for innocence in this country," Mendelson recalled, according to USA Today. "[Viewers'] love for the show [is] passed down to their children and grandchildren. We still get letters where people say it's the one time a year when the whole family can get together and watch."

With A Charlie Brown Thanksgiving as well as the extra Turkey Day-themed short, The Mayflower Voyagers, both airing on ABC on Nov. 21 next week, you can make the whole pre-Thanksgiving night Peanuts-themed.

And don't forget, according to Entertainment Weekly, the Charlie Brown balloon will be seen as always during the Macy's Thanksgiving Day Parade, airing live on NBC at 9 a.m. EST that morning. So who's ready for A Very Charlie Brown holiday season?