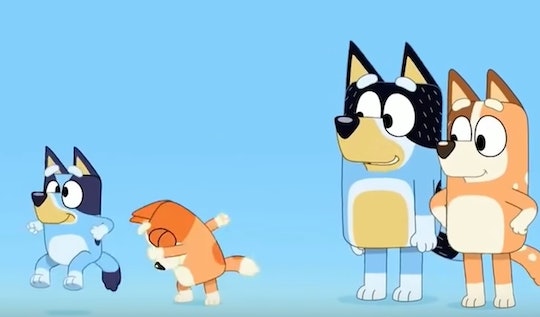 Here's How To Watch 'Bluey,' That Cute Australian Cartoon About A Family Of Dogs

Watch out, parents — a new cartoon is set to sweep the nation, and make its way in to your kid;s heart. Bluey is the new obsession for every kid who loves cartoons, which means your kid will love it, too. If people were wondering where to watch Bluey, they should be happy to know that it will make its debut in the United States very soon.

There is no denying that kids love cartoons. From Peppa Pig to Molly of Denali, little kids love sitting down and watching any show that grabs their attention. And if they love these two shows, then they'll definitely love Bluey, a cartoon coming to the United States that is already a huge hit in Australia. But before your kid starts asking for a Bluey backpack this Christmas, there are just a few things that parents will want to know about the show.

Bluey is an Australian cartoon about a 6-year-old blue heeler puppy dog named Bluey, according to Mirror. Bluey lives with her mom, dad, and younger sister Bingo, and focuses on their family dynamic, which means that parents will probably like it too. They will especially like it since it focuses on what it's like to parent young kids, according to the BBC — the dad character on the show always has a beer in his hand and plays an active role in his daughter's upbringing.

Even the show's opening credits are good. Watching them will make anyone want to dance along with the dogs who know how to get down.

Luckily, people in the United States won't have to wait much longer until they can watch Bluey and understand why it has become the most streamed children's show in Australia, according to the BBC. Earlier this summer, Disney acquired the rights to air Bluey around the world. That's right — Bluey is coming to Disney Junior (if your cable subscription includes the channel) and Disney+ when the brand new streaming service launches in the United States on Nov. 12.

Luckily, kids won't have too many episodes to catch up on. Bluey is a relatively new show, according to The Guardian, that only has two seasons with each episode lasting just seven minutes long. And since it is such a success in Australia, Disney executives are already thinking that it will be a huge success when it makes its way to the states. "The warmth and authenticity of Bluey's family dynamic is what first captured our interest in the show," Jane Gould, senior vice president of Disney Channels Worldwide told The Guardian in June.

"Bluey reminds us all of our own families, and it plays out the small but emotionally epic dramas of day-to-day life in surprising, heartfelt, and very funny ways that will engage children and parents alike," she added.

But Disney+ still needs to launch before parents can truly see what all this hype is about. Disney+ is a streaming service, much like Netflix and Hulu, that will only cost $7 a month, or $70 a year, according to Cnet, which is a bargain for some serious entertainment. The platform will include brand new original content from Disney — and people will be able to find every single one of of their favorite live action and animated Disney films on the platform. Having Bluey on there will be like an added bonus.

The wait definitely seems like it will be worth it — Bluey looks like such a good show for kids to watch and their parents to appreciate. It won't be long before the rest of the world can find out why so many people in Australia are already obsessed with it.