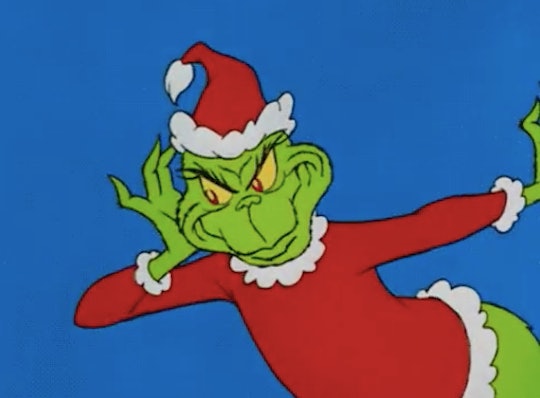 There’s a new Grinch movie in theaters starring Benedict Cumberbatch as everyone’s favorite green grump. Whether you go to the theater to see it, this is the perfect time of year to look back at what’s become an beloved part of holiday viewing. So to help get you and your family fully into the holiday spirit, here’s where to watch How The Grinch Stole Christmas.

Two versions of this incredible story have actually been produced before, and each of them have become classics in their own right. The 1966 animated version is the more lighthearted and colorful of the two, while the 2000 live-action version, starring Jim Carrey is a bit darker, but so humorous. Both are full of the message of Christmas redemption though and are guaranteed to bring chuckles and that warm Christmas feeling.

The story is based on the 1957 book from Dr. Seuss, in which the Grinch, whose heart is two sizes too small, hatches a plan to steal Christmas from the people of Whoville. In the end, it’s the Grinch who learns a lesson as he realizes the real meaning of the season isn’t all wrapped up in presents.

For most of us, the iconic characters of The Grinch — including him, his trusty dog Max, Cindy Lou Who, and all the Whoville residents — have an indelible place in childhood memories and adult traditions.

And good news! Both of these movies will be airing on broadcast TV during the holiday season, according to the magical site ChristmasTVSchedule.com. The 1966 cartoon will first air on Nov. 23 at 8 p.m. ET, and again on Dec. 6 at 8:00 p.m. ET. It will also air on Christmas day at 8:00 p.m. ET. All showings are on NBC.

To see the 2000 version with Jim Carrey, you’ll want to head over to Freeform where it is showing quite regularly. The first time is Saturday, Dec. 1 at 9:15 p.m. ET, followed by:

All times are Eastern.

The live-action 2000 version is also available on Netflix with a subscription, as well as on demand from DirecTV, Amazon Prime Video, on iTunes, and streaming video services like Vudu.

The 1966 animated version is a little tougher to find, but it’s still out there. It’s not currently available on any streaming services but you always have the option to buy the DVD for pretty close to the same price it would cost to stream. It’s available in a 50th anniversary edition on Blu-ray and DVD on Amazon.

If you’re looking to shop around for other avenues, the important thing to know is that this version — the 1966 animated one — has an exclamation point on the end of the title: How The Grinch Stole Christmas!

But there are plenty of opportunities to catch it for free coming up on broadcast, and it’s so fun to watch these Christmas specials the old-fashioned way, commercials and all. So set your DVR and sit back and enjoy!