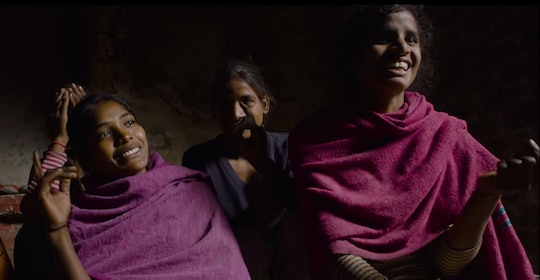 Everyone Needs To Watch 'Period. End Of Sentence.' Because, Yup, It Just Won An Oscar

Period. End of Sentence., a stunning short documentary about menstrual equality, won an Oscar at the 91st Academy Awards, marking a huge step forward in the fight for women's rights across the globe. But if you haven't seen the incredibly moving and educational short film yet, good news! You can stream Period. End of Sentence. on Netflix right now, so hope is not lost.

That's right; the Oscar-winning film is available on Netflix, so you don't even have to leave the couch to experience the groundbreaking short. Period. End of Sentence. explores the topic of menstrual equality, which The New York Times defines as "equal access to hygiene products, but also to education about reproductive health." The short documentary spotlights the lack of education and resources surrounding women's health available in rural India, telling the story of two women's journey to bring affordable sanitary pads to a village where periods were stigmatized, as Glamour explained.

The documentary is moving and educational in more ways than one, helping women who don't have access or information to basic health care while also educating more privileged populations about how prevalent menstrual inequity is. The short took home the Academy Award for Best Short Documentary at the 2019 Oscars, and during her acceptance speech for the award, producer Melissa Berton said, "A period should end a sentence, not a girl's education."

The sentiment referred back to the film's title, but also to the detrimental impact a lack of education on reproductive health can have on girls and women. As is the case in the short doc, the women focused on in the documentary literally have to miss school whenever they menstruate, falling behind in school over a natural bodily function they literally can't control, explains the Pad Project website. It's a heartbreaking reality, but the documentary is helping to create change in the village and surrounding areas, bringing women closer to the equity they deserve.

Twitter erupted in support of the win and the producer's rallying cry after the acceptance speech, with both stars and movie lovers alike taking to the platform to spread the word.

Others pointed out how trailblazing it was to have a discussion about menstruation on such a public platform, as periods are usually swept under the rug and deemed inappropriate to discuss in public. But the short's win changed all that, and Twitter celebrated the progress.

Indeed, the lack of discussion around female reproductive health is a major theme explored in the film, and it was also a reason the short almost didn't win the Best Short award. As Cosmopolitan reported, one Oscars judge reportedly wasn't going to vote for Period. End of Sentence. to win because the documentary is "well done, but it's about women getting their period, and I don't think any man is voting for this film because it's just icky for men." Yep: that's a real sentence that a real man reportedly wrote on paper ballot in 2019. The anonymous judge's words are a direct example of the exact kind of ignorance the documentary's creators are trying to end, reinforcing the need for it.

Menstrual equality can't happen overnight, but educating yourself on the topic is definitely a step in the right direction. Stream Period. End of Sentence. on Netflix now, and head to the Pad Project website for more info on how you can help make periods less of detriment to people who menstruate everywhere.