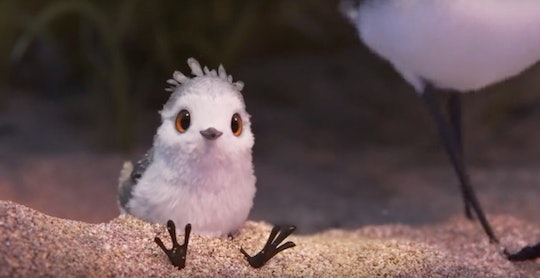 Oscar-Nominated 'Piper' Is A Must-Watch For All

Pixar's animated shorts are often just as enjoyable (and adorable) as their full-length features. Fans who hit theaters for Finding Dory this past summer were lucky to catch a bonus flick before the main event. If you've yet to see the seriously sweet short about a baby bird, here's some advice on where to watch Oscar-nominated Piper, because you can surely squeeze in six minutes of viewing before the awards on Sunday night.

Though you'd think they might be a shoo-in to win, Disney/Pixar hasn't won an Oscar for an animated short in 15 years. Yes, Pixar's last animated short Oscar win was all the way back in 2001 when For the Birds took home the statuette. Piper is full of birds, too, so maybe avian inspiration is the key to success.

Smooth and stunning in its animation, Piper is a dream to watch. The short starts with a wide-eyed baby bird emerging from underneath its parent, who bids the baby out to sea. Then, a lesson begins to take place, involving the sea, neighboring creatures, and how to find food. All of this is set to languid orchestration, punctuated by plenty of chirping and tweeting. Of course, a little bit of drama occurs as the waves start to roll in, but you'll have to see for yourself how it all ends up for Piper.

Watch the Piper trailer, which features the beginning of the short, below:

Your best bets to find high-quality versions of Piper to watch include streaming or downloading the short on whatever platform you prefer. You can watch Piper on YouTube or download it on iTunes; Google Play movies is also an option. All of these mentioned platforms cost $1.99 each.

There are, of course, some less "official" ways to watch Piper for free, but you'll definitely be sacrificing quality in the midst of cutting corners. The subtle, lifelike details are what makes Pixar's work amazing — details that you won't be able to catch in a low-res, bootlegged edition that's been ripped off and uploaded to YouTube or Vimeo.

Competing with Borrowed Time, Pearl, Blind Vaysha, and Pear Cider and Cigarettes, Piper is definitely the youngest and most innocent submission, as far as subject matter goes. The other Oscar nominees tackle much darker and more serious themes, so that, in the end, who will win the animated short Oscar is a genuine toss-up, though Piper is a definite fan favorite. Regardless, go ahead and download Piper, cuddle up with your kid, and watch the film together — because there's a reason it's been the source of such high acclaim.