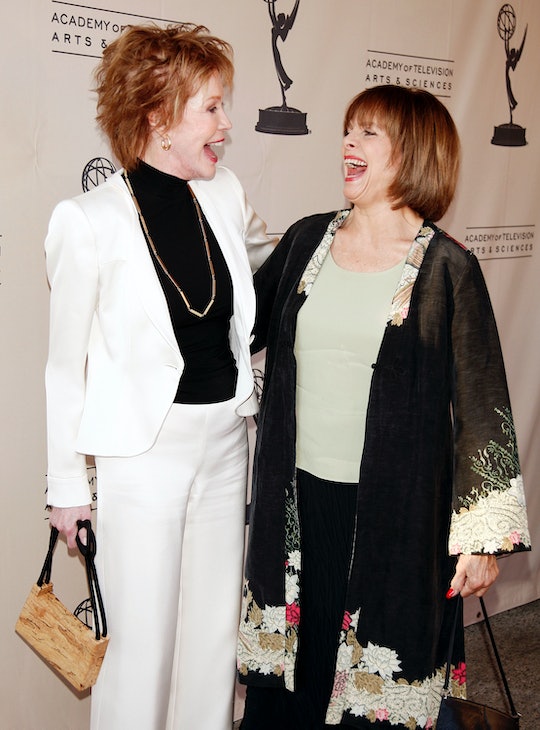 Where To Watch 'Rhoda'

News of Mary Tyler Moore's death on Wednesday has got fans binging her classic series, and once they're done, the wounds might feel like they've reopened. But it doesn't have to end. Here's how to watch Rhoda, the spin-off of The Mary Tyler Moore Show centered around Mary's best friend, played by Valerie Harper. Season One of Rhoda is available on Hulu, and viewers can get a one-week subscription for free, which plenty of time to watch the 24 half-hour episodes, plus the special hour-long wedding episode, if you're dedicated. And yes, Mary Richards does pay a few visits to her friend over the course of the series.

Most of Season One is also available to stream for free through Comcast's ad-supported xfinity site, although curiously, Episodes 8 through 10 are missing (and 8 is the wedding, so that's kind of a big deal). The first four seasons are available on DVD, but unfortunately, there are no current plans to package the fifth season. And while I take copyright law very seriously, and would never condone unlawful behavior, I should mention for the sake of thoroughness that there is a YouTube channel that has five playlists I think might be of interest to Rhoda fans.

According to The A.V. Club, Rhoda was created when it was clear that both Harper and her character had grown too big to play second-fiddle to Mary. The series began with Rhoda returning to her hometown of New York City for a two-week vacation, during which she stayed with her younger sister, Brenda (Julie Kavner). In the premiere, Rhoda met Joe (David Groh), and the pair quickly fell for each other. Joe proposed in Episode 6 and they were wed on Oct. 28, 1974 in front of 52 million viewers (22 million more than President Donald Trump's inauguration).

According to Parade, fans were heavily invested in the marriage; many even sent wedding gifts and cards to CBS Studios for the fictional couple. So perhaps it shouldn't have come as a surprise when, after Rhoda and Joe separated in the Season 3 premiere, fans began sending Groh hate mail for "leaving" his "wife." Viewership dropped off dramatically after the couple's eventual divorce. Showrunners tried a series of casting and scheduling changes to to make up for the misstep, but the series never recovered its original ratings, and ended after four and a half seasons. But what glorious seasons they were! Come for the outspoken single career gal (who ended up married for half the series), stay for the voices of Garfield and Marge Simpson.