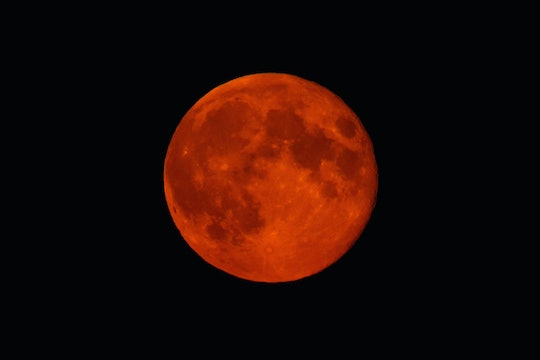 A blood moon is rising tonight, and people all over the world are gearing up to enjoy this amazing display. But knowing where to watch the blood moon in 2018 is pretty crucial, because it will not be visible for everyone. But you're not totally out of luck if you live outside the eclipse zone, thanks to some awesome livestreams.

Most everyone in the world will be able to watch the blood moon lunar eclipse on Friday, July 27, except for pretty much everybody in North America, as explained on Vox. If you live inside the eclipse zone, then go outside at 17:14 Coordinated Universal time to watch the start of the eclipse, which will last over an hour and a half, as further explained in Vox. It will probably be one of those natural phenomenons you remember for a lifetime. But people who live in the United States, Canada, Mexico, Guatemala, Nicaragua, Costa Rica, Panama, Cuba, and Jamaica will miss the eclipse in person (provided I'm reading the blood moon visibility map on Sky.com correctly).

But if you live in one of the countries the eclipse is missing, there are still plenty of opportunities to observe the blood moon, thanks to the magic of technology. You can livestream the eclipse, known as "The Night of the Red Moon and the Red Planet", at The Virtual Telescope Project. The footage will shoot above a skyline in Rome, so it's sure to be a striking show. Start watching at 18:30 Coordinated Universal Time, or 2:30 p.m. Eastern Time in the United States.

And beginning at 1:00 p.m. Eastern Time, the astronomy website Slooh will have a Mini Buck Moon Total Lunar Eclipse livecast. Hosted by astronomers Paul Cox and Dr. Paige Godfrey, as well as Slooh Storyteller Helen Avery, this livecast is sure to be quite the show. You will need to join Slooh as a member in order to watch it. Oh, and there's a reason for the colorful name. The full moon in July is known as the Buck Moon, named after the season in which male deer begin growing their antlers, as further explained in Slooh.

Although it sounds kind of ominous, the blood moon is a natural phenomenon that happens during some lunar eclipses. Several events have to coincide to create a blood moon, though. First, you need a total lunar eclipse to take place, which occurs when the sun, earth, and moon line up in their orbits, as explained by NASA. At the exact moment of the eclipse, when the earth's shadow covers the light of the moon, it does not go completely dark. Instead, the moon looks red, orange, or gold, thanks to light filtration from the earth's atmosphere, as further outlined by NASA. The blue-colored light tends to get scattered away, leaving the redder wavelengths of light to reflect the lunar surface. And when the moon takes on this red color during an eclipse, it's appropriately known as a blood moon.

This particular blood moon is especially notable. In fact, it's the longest blood moon eclipse of the century, as explained in National Geographic. Whether you observe it in person or on a screen, you'll have plenty of time to enjoy this striking natural phenomenon.