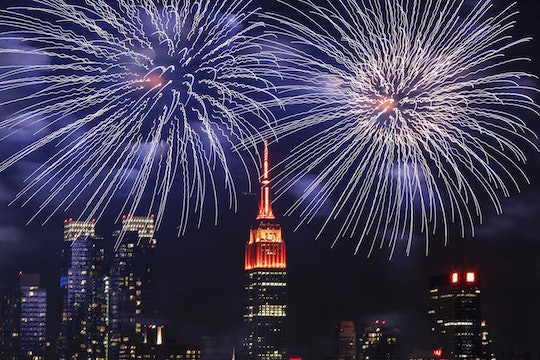 Where To Watch The Fireworks In NYC, Because The Display Is Pretty Spectacular

Nothing says summer in America like Fourth of July fireworks, and it just so happens to be that time of year again. Break out your American flag paraphernalia (the tasteful stuff), your grill, your potato salad, your popsicles, and find the highest roof deck around. From parks, to porches, to street corners, here is where to watch the fireworks in NYC this Independence Day weekend.

First, know going into this weekend that there will be many opportunities to watch fireworks. New York, being the expansive city it is, has many fireworks shows, so don't be dismayed if you can't find a good view of one. Traffic and transit are going to be terrible, so stay local and stay safe. There are plenty of fireworks to go around, and, despite the tumult of recent politics, plenty of things to be proud of when it comes to being American. Gather some friends, sit back, and enjoy the sounds of summer and the majestic display of colors against the July night sky.

According to Time Out, the Macy’s 4th of July Fireworks will be shot from a barge on the East River at about 9:20 p.m. on Monday, July 4. The Jersey City and Statue of Liberty fireworks start at 9:30 p.m. The shows should last for about 30 minutes. The Macy’s Fireworks barges will be staged near Pier 17 and between 23rd Street and 37th Street. As its name suggests, the Statue of Liberty fireworks with be going off all around Lady Liberty. There will also be pyrotechnics in front of the Colgate Clock and the Goldman Sachs building. To catch a bit of the action, here are some excellent vantage points.

If you're near Williamsburg, this is a great location to put down a blanket and watch the show over the East River. Normally, the park closes at 9 p.m., but according to the park's website website, it will be staying open late on July 4 for the special occasion.

Brooklyn Bridge Park in Dumbo will be crowded, but that's because it provides a great view of the East River fireworks. Get there early to mark out your territory and you won't be disappointed. Be sure to leave any large bags at home; most likely, the police will be checking them.

This little park in Greenpoint, Brooklyn, is right on the river and should offer some spectacular views of the fireworks this year. It's near a lot of restaurants and bars, too, if you want to make a night of it.

There are a number of cruises going out on the river for the fireworks display, but if this is of interest, book your tickets quick. Though they can be pricey, some Fourth of July boat tours include dinner, drinks, and dancing. A few of the most popular are Hornblower Cruises, Clipper City Tall Ships, New York Water Taxi, and Bateaux New York, according to the NYC Insider Guide.

There are a number of rooftop establishments in Manhattan and Brooklyn that will be great places to watch the fireworks. Hotels, in particular, have some prime viewing locations. Try Penthouse 808 at the Ravel Hotel, the rooftop lounge at the Z Hotel, the Kimberly Hotel bar, Pod 39 Hotel's rooftop taqueria, and the rooftop at the Park South Hotel, though some will be charging admission. It's not a rooftop, but according to Curbed, the Empire State Building and One World Tower will be hosting some pricey viewing events. The views from those iconic buildings will be amazing.

Brooklyn Bridge will be an amazing place to watch the fireworks, but it's sure to be packed with people looking to get a front-row seat. While the Williamsburg Bridge is not as close, and the view will be a little obscured, it should also be a good option.

When all else fails, remember that fireworks are up high in the sky, so as long as you've got a little view (no matter how far away you are) you should still be able to enjoy the festivities. Hopefully the weather cooperates and it's another lovely summer evening in New York.