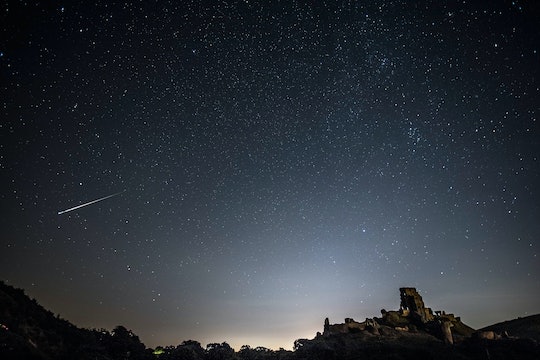 I'm sure you've heard the adage that April showers bring May flowers, but you might not have realized it applies to more than just rainstorms. Indeed, the annual Lyrid meteor shower lights up the sky every April, as the trail of a centuries old comet orbits the sun. The 2019 show will reach its peak in just a few weeks, so the time to figure out the best place to check out the natural firework show is now.

As NASA explained, the Lyrids are one of the oldest meteor showers we know of, as the first recorded shower dates all the way back to 687 BC, which is over 2,700 years ago. Although the shower will appear to you as an array of shooting stars, the reality of the Lyrids isn't so romantic. "Annual meteor showers arise when the Earth passes through streams of debris left behind by comets and asteroids," which then causes the debris to burn up, as In-The-Sky.org reported. So really you'll just be watching dirt explode if you decide to tune in for a viewing, but it will be really cool looking dirt.

The Lyrid showers light up the sky from April 16 to April 25, but the shower will reach its peak before dawn on April 22, per Space.com. So you'll get the best view if you tune in to watch just before the sun comes up on that Monday. You'll likely see between 15 to 20 meteors per hour, as is the usual number, but NASA reported that sometimes the Lyrids can produce around 100 meteors per hour, as was the case with the showers in 1803, 1922, 1945, and 1982. Astronomers can't predict when these intensified showers will hit, so it's worth tuning in every year for the show, even if it does mean staying up all night.

Anyone living in the Northern Hemisphere should be able to see the Lyrids at their peak, though the direction they appear to be coming from will vary based on where you are. The key to getting good visibility of the shower is to go somewhere relatively secluded that is most importantly away from a city, as the artificial lights in them will detract from the shower. Once you're in a clear area, lie down and look up at the sky, giving your eyes time to get used to the darkness, and soon you'll see the magic. NASA warned it can take up to thirty minutes for your eyes to adjust, so have some patience if you can't see anything right away. You can also use Time and Date's Interactive Meteor Shower Map to find out which direction the Lyrids are falling after you find your spot to help you get the most out of it.

Watching the Lyrid showers is worth doing even though it will disrupt your sleep schedule, but since April 22 falls on Easter Monday this year, your kiddos might not have school so you could risk losing a little snooze time. You could even turn the shower into an excuse for a family camping trip. Just make sure everyone gets a nap in once the show is over.