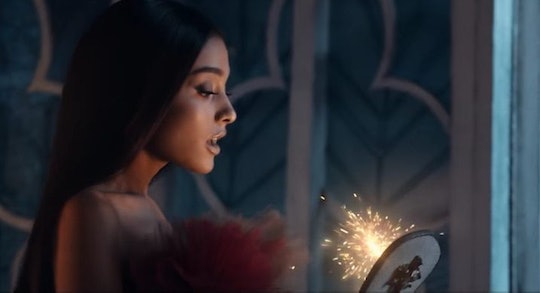 The 'Beauty & The Beast' Music Video Is Enchanting

Looking for a way to kick the Monday blues? Well, Ariana Grande and John Legend have just the fix because after you watch their new “Beauty and the Beast" music video you won't be able to do anything else but feel warm and happy inside. The musically magical duo released the masterpiece worldwide on Sunday night on Freedom, a YouTube partner network, a month after teasing listeners with the audio version of their take on the Disney classic. And this revitalized version will not disappoint.

The music video opens with 23-year-old Grande staring into the enchanted mirror in the Beast's castle as she sings the 1991 hit while wearing a striking, magenta tulle gown that resembles a red rose. Meanwhile, award-winning musician Legend, who's at the piano, looks beyond charming in his embroidered navy jacket, just like the handsome young prince in the film wears. The pair performs their rendition right in the middle of the royal ballroom for nearly a minute before Belle and the Beast — who are portrayed in the upcoming film by Emma Watson and Dan Stevens, respectively — enter the scene to share a dance.

This sneak peak of the live-action remake of the classic film, which hits movie theaters on March 17, is easily available for your viewing on YouTube. Can't wait any longer and want to see the twinkling fairy tale music video for yourself right now? Please, be our guest:

The original "Beauty and the Beast" track was first made famous by Celine Dion and Peabo Bryson in 1991 for the Disney animated feature. The film went on to win numerous Academy Awards and Golden Globes, and the song earned both an Oscar and a Grammy.

Now, Legend and Grande's new version puts a whole new spin on this classic, reminding us why it's remained such a beloved song. And it looks like people are still enamored by this childhood classic: In less than 24 hours since the music video first dropped, it's been watched more than 3.5 million times and that number continues to rise.

Taking on a timeless classic like this is no easy feat. Luckily, if you're two of the best musicians in the business right now, it's a little bit more doable. The film's producer Ron Fair reportedly acknowledged the challenge Legend and Grande were up against in a recent statement, according to E! News, adding that the duo were absolutely capable of giving it a powerful edge.

"Stepping into the shoes of an Oscar- and Grammy Award-winning classic is not small potatoes," Fair said. "But with today's two greatest singers — John Legend and Ariana Grande — we are bringing the song back with a new school/old school fresh treatment that shows the soulfulness and power of what a great melody and lyric can inspire."

Thankfully, the dazzling duo clearly did just that.