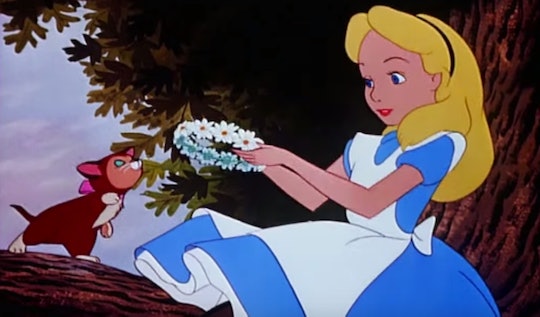 Where To Watch The Original 'Alice in Wonderland' From 1951, Because It's Still Amazing

Alice Through the Looking Glass promises the same visual whimsy of 2010's Alice in Wonderland. Opening Friday, the movie brings back many favorite characters: Johnny Depp's Hatter, Helena Bonham Carter's Iracebeth, and Anne Hathaway's Mirana. Fans will see new faces, too, including Sacha Baron Cohen as Time. But long before Wonderland returned to the screen in the 21st century, kids grew up on Disney's animated version. Families wondering where to watch the original Alice in Wonderland from 1951 are in luck: there are plenty of ways to stream the movie online and share the magic with a new generation.

Anyone in the mood to time travel to the Wonderland of 1951 can find the original film on the Internet. Those with an iTunes account can rent the movie in HD for $3.99 or in SD for $2.99. Apple movie rentals can be viewed on Macs and PCs, on a TV set using Apple TV, and on many iOS devices (iPhones, iPads, and iPod touches "with iOS 3.1.3 or later" and iPod classics and iPod nanos that are "third, fourth, or fifth generation"). Families with kids who watch movies again and again may prefer to buy Alice in Wonderland: it's $17.99 for the HD version and $12.99 for SD. Watch on Amazon Video or streaming service VUDU for the same price; Vudu sells the movie in SD, HD, and HDX.

The prices are mostly the same in the PlayStation Store, except the SD version is available to purchase for only $9.99. Fans can stream the movie on the "web, PS4, PS3, PS Vita, PSP, Xperia Tablet, Xperia Smartphone, Bravia TV, Blu-Ray Player, Media Go, [and] Android Devices." The Google Play store doesn't distinguish between the HD and SD version; Alice in Wonderland is available to rent for $2.99 and to buy for $12.99. A full list of Google Play supported devices is available online.

Families who prefer the Blu-ray or DVD format can also buy a disc online. Amazon sells Alice in Wonderland on Blu-ray for $13.91 and on DVD for $13.88. Subscribe to DVD.com to get the DVD in the mail (a subscription is only $7.99 per month, but the first month is free).

The original Alice in Wonderland is rated G, according to IMDb, making it a slightly gentler introduction to the tale than the recent live-action movies. Though it's exciting to see Wonderland in 3-D, there's something equally special about settling in on the sofa to share the classic film as a family.