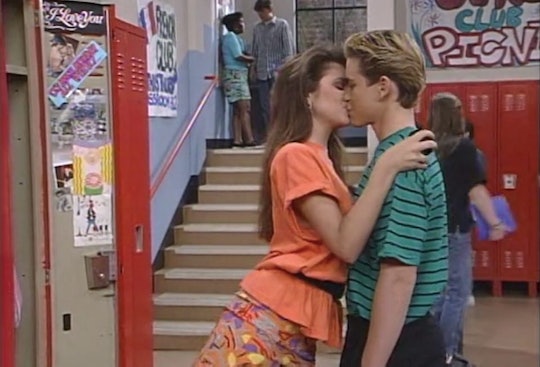 What a time to be alive! Friends, we live in a magical world where your old favorite shows have a pretty good shot of making a comeback. I'm looking at you, Gilmore Girls. Oh, hey, Veronica Mars. Another exciting new season of a classic is on its way. Here's where to watch the Saved By The Bell revival, because you won't want to miss it.

Rumors of a revival of Saved By The Bell have been circulating for what seems like an eternity, but the official word is out, people. The new season will be streaming as early as next year and at least two of the original stars will be there, according to Variety. The reboot will be available only on the new NBCU-owned streaming service launching next spring.

The upcoming season will explore a world where Zack Morris, serving as the governor of California, is looking to repair his damaged reputation after closing a number of low-income high schools, according Vulture. In a move of hilarious PR genius, Governor Morris — am I the only one who can't say that out loud with a straight face? — “send the affected students to the highest-performing schools in the state — including Bayside High. The influx of new students gives the overprivileged Bayside kids a much-needed and hilarious dose of reality," as a press release on the reboot explained. This fresh take on Bayside High's student population is the work of 30 Rock writer and Great News creator Tracey Wigfield, Vulture reported

So far, the only original stars set to reprise their roles are Elizabeth Berkley — who played Jessie Spano — and Mario Lopez — the face of AC Slater, according to Entertainment Tonight Canada. However, a source with insider knowledge reportedly told The Hollywood Reporter that more original cast members, including Mark-Paul Gosselaar, have discussed returning as well.

The new episodes, along with revivals of Battlestar Galactica and Punky Brewster, will be available exclusively on the Peacock streaming platform, according to TV Line. Other NBC favorites, such as The Office and Parks and Recreation will also be available for streaming on Peacock once they are no longer available on Netflix. There is no official release date known for the new season of Saved By The Bell, but Peacock is set to go live in April of 2020, as The New York Times reported. Membership costs for Peacock are also still unannounced at the time of this publication.

It's not all that surprising that NBC should choose to bring back Saved By The Bell. Decades after Preppie and the gang went off air, interest in the show and their story has remained. Since the original series aired on the network from 1989 to 1994, it has had two spinoff shows — Saved by the Bell: The College Years and Saved by the Bell: The New Class — along well as two television movies, as Refinery29 reported.

There's nothing better than seeing your old favorite characters reimagined at new stages in their lives. And, I don't know about you, but the promise of Zack Morris in politics is enough to get me tuning in.