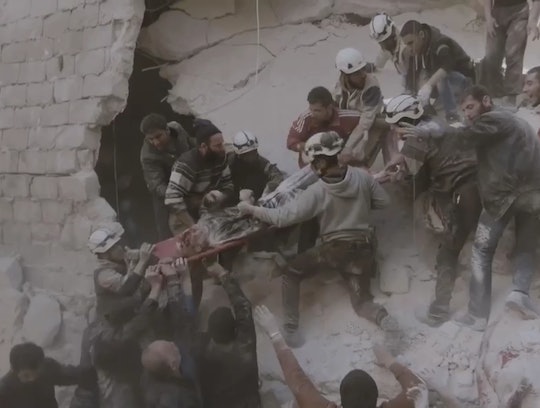 'The White Helmets' Is A Must-Watch Oscars Short

The 89th Academy Awards ceremony is just hours away, and film fans are scrambling to screen as many of the nominees as they can before the show. But not every movie requires a 24-hour theater marathon commitment; you can watch The White Helmets, the Oscar-nominated short documentary, right in the comfort of your own home on Netflix. It's probably for the best, because the trailer alone is likely to make most viewers tear up, and sobbing in front of strangers is not the most enjoyable way to spend a weekend.

The White Helmets directors Orlando von Einsiedel and Joanna Natasegara were previously nominated for an Academy Award in 2014 for their documentary feature Virunga. Virunga showcases the Congolese park rangers who risk their lives to protect the national park where the last remaining mountain gorillas live. The White Helmets also features heroes putting their lives on the line to protect others, but instead of militias and poachers, they face a steady onslaught of bombs in a seemingly never-ending civil war. The White Helmets are a group of unarmed civilian volunteers who rescue Syrians from the aftermath of more than 100 bombings per day. Since their inception in 2013, they've saved more than 60,000 lives.

According to IndieWire, White Helmets leader Raed Saleh and cinematographer/White Helmets volunteer Khaled Khatib will attend the Academy Awards ceremony, despite confusion over the recent executive order banning Syrians from traveling to the United States. The ban has been halted by the courts, and Natasegara told Indiewire that both men have received visas.

The film centers around footage shot by the White Helmets themselves as they rescue survivors from piles of rubble following airstrikes by the Russian air force and Syrian President Bashar al-Assad’s regime in the rebel-held city of Aleppo, where schools and hospitals are considered fair game. According to Slate, the White Helmets are often the only emergency first responders allowed into the city. The film brings viewers right into the middle of the sometimes-abstract concept of the war, and shows a firsthand account of these brave volunteers who get up every morning, kiss their families goodbye, and then spend the day patiently watching bombs fall and pulling babies out from under decimated apartment buildings. Their courage is unimaginable, even as viewers watch the scenes unfold. But for the White Helmets, none of whom had any rescue training or experience before the war, there's simply no alternative.