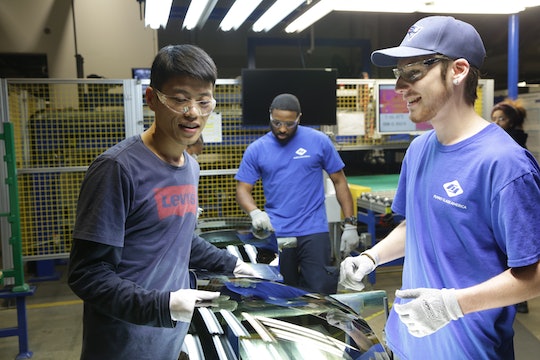 The Netflix original documentary American Factory explores the culture clash that occurred when a Chinese company opened a factory in a small American town. Though the launch resulted in jobs for two thousand Americans, the situation didn't unfold without a struggle. Learning where American Factory was filmed is important to understanding the story it's telling, because its location informed everything that unfolded.

Filmmakers Steven Bognar and Julia Reichert shot American Factory in Moraine, a town just outside of Dayton, according to The A.V. Club. They had initially followed the closing of a General Motors factory there in the 2009 short The Last Truck; they picked up in the exact same spot in 2014 after the GM factory had been purchased by the Chinese manufacturing company Fuyao. It would now manufacture glass. The workforce was comprised of Moraine locals and Chinese workers. The opening of the Fuyao plant was promising, but work conditions soon proved to be more than unsatisfactory, to put it mildly. The Americans were working longer hours for less pay and were not able to unionize lest the company shut down entirely. Environmental and safety regulations also weren't being met.

Bognar and Reichert were there to capture the entire story as it happened. "You're getting a slice of what globalization really looks like on a human level," Reichert said, as reported by Yahoo! News. "I think the film leaves you with a sense of unease."

American Factory is the first film to come from Barack and Michelle Obama's company Higher Ground Productions; per the New York Post, they acquired the film at Sundance in January 2019. Bognar told the publication that the project resonated with Mrs. Obama because she recognized aspects of her own upbringing in it. "Mrs. Obama said it resonated with her because her father had done an intense, hardworking job for decades just to provide for his family, and she felt the Midwestern-ness...in what she saw onscreen," Bognar said.

But, Reichert added, the film's broader themes of policy and globalization also hit home with the former president and first lady. Though the film follows a very specific situation that unfolded in a very specific place, it draws on larger, worldwide concerns, too. It links economic and political issues to cultural ones, according to the Huffington Post's review. But the review also praised American Factory for delving into its topics in a fair and thorough way.

The American workers and the Chinese workers had incompatible ideas about the running of the factory, in part because of how things differ from one country to the other. And the filmmakers felt it was important to show both perspectives. "We wanted to put you in the shoes of both the executives and the workers, the Chinese and the Americans," Bognar told HuffPo, likening it to the upstairs/downstairs dynamic of the PBS series Downton Abbey. He and Reichert wanted to present what happened without judgement, "so you have empathy for everyone."

The story is wholly dependent on its setting, but its impact extends far beyond.