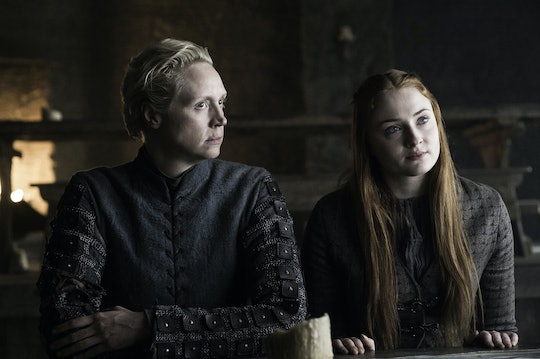 Where Was Brienne Of Tarth On The 'Game Of Thrones' Season 6 Finale? Perhaps Heading North

The super-sized Game of Thrones season finale was a shocking and exciting installment, filled with plenty of game-changing moments. It also featured a far greater number of major characters then we've seen in a while, with basically every single character of note making an appearance (they even managed to squeeze Sam and Gilly into that 69 minute runtime, which was honestly worth it for that Sam-in-the-library scene alone). But there was one glaring absence that left me wondering where Brienne of Tarth is during the Game of Thrones Season 6 finale.

The last time we saw Brienne (and her faithful squire Podrick), she was rowing away from Riverrun and Jaime Lannister, shattering all of our Brienne/Jaime 'shipping hearts in the process.

She and Pod managed to escape via rowboat as Jaime, Bronn, and Walder Frey's army led the relatively bloodless siege to take back Riverrun from the Blackfish. This was after Brienne failed to convince the Blackfish to commit his army and join forces with Sansa Stark in the Battle of the Bastards.

In the end, it was a good thing that she and Pod left when they did, because as she told Jaime, honor would have dictated that she would join the Tully side (Sansa's kin) and fight against him. Hence that incredibly bittersweet look and wave she gave as Pod rowed them away.

But all that was way back on Game of Thrones Season 6 Episode 8. Not only was Brienne absent from the jam-packed finale "The Winds of Winter," she was very conspicuously missing from the penultimate episode's Battle of the Bastards as well. And I get that Sansa has a lot of things to worry about, but it's also a little weird that she doesn't even appear remotely worried about Brienne being missing, isn't it?

It stands to reason that Brienne and Pod were taking the quickest possible route back to Winterfell, where they had intended to bring along the Blackfish's forces to help in the fight against Ramsay. After spending an entire season protecting and serving Sansa, it's super unlikely that Brienne simply decided that this was her opportunity to take a vacation. I'm a little shaky on Westeros geography, but since they clearly expected to make it from Riverrun back to Winterfell in time for the battle (ideally with the Blackfish & Co. in tow), it's fairly obvious that they ran into some kind of snafu on their journey back.

There are a few potential options for what might be holding the knight and her squire up. One popular theory is that the Brienne and Pod ran into (or will run into) the Brotherhood Without Banners, who, you may recall, is now traveling with Sandor Clegane (a.k.a., the Hound). That could make for a dramatic, awkward, and potentially bloody reunion in Season 7, given that Brienne fought the Hound and left him for dead two seasons ago.

Alternatively, Brienne and Pod might run into Arya. The youngest Stark girl was also on her way home (according to what she told Jaqen when she left Braavos, anyway) but took a quick detour to avenge her mother and brother by slitting Walder Frey's throat. It would be great to see Brienne and Arya reunite in Season 7 while en route back to Winterfell and for Brienne to realize that Arya didn't wind up dead on her watch.

On the flip side, it's totally possible that we'll just never see Brienne and Pod again. You know what happens to people on this show when they get into rowboats – they vanish into the Westerosi version of the Bermuda Triangle. Remember this guy?

Here's hoping that Brienne and Pod don't pull a Gendry and vanish completely from Game of Thrones.