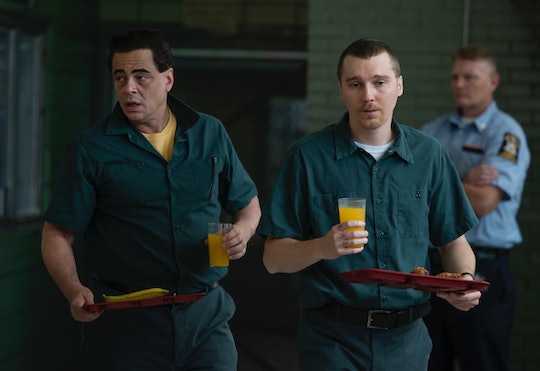 Showtime's 'Escape At Dannemora' Was Shot On An Eerily Authentic Location

The Showtime mini-series Escape at Dannemora will wrap up its seven-episode order when the finale airs on Sunday, Dec. 30. If you've been watching the series, you have noticed just how authentic some parts of the set look. But some viewers may not realize exactly how authentic it really is. So, where was Escape at Dannemora filmed? You may be surprised by the lengths the team went to make this series as realistic as possible.

As summarized by Deadline, Escape at Dannemora is based on the 2015 story of two inmates escaping from Clinton Correctional Facility in Dannemora, New York. Richard Matt and David Sweat's (played by Benicio del Toro and Paul Dano) escape was made possible thanks to the help of a prison employee (played by Patricia Arquette). The prison is still active, but that didn't stop director Ben Stiller from bringing his cast upstate. That's right — the cast actually shot on-location in Dannemora on the prison's grounds. Seriously.

According to Syracuse.com, the cast filmed one scene in the actual cabin where Sweat and Matt reportedly hid out until Sweat was captured by authorities. And another scene was filmed down the block from the prison — specifically, in the actual manhole through which Sweat and Matt escaped. Most interestingly, the production got to spend nine days on Clinton Correctional Facility's grounds, where they shot scenes on the recreational yard, and additionally took a ton of exterior shots of the prison's various buildings — as director Ben Stiller explained to Plattsburgh, NY local news outlet the Burlington Free Press.

As Stiller, Dano, del Toro, and Arquette discuss in a behind-the-scenes video for Showtime, it's clear that shooting on-location added a spooky depth to the team's artistic process. "Going up to Dannemora, seeing the woods, the mountains, the hills, seeing the town, then seeing the prison, and the prison wall... I don't think you know what it's like till you've been in," Dano said in the video.

"When you shoot in a real location where a real event happened, there's a seriousness to it," added del Toro. Arquette added that shooting on-location was "scary" but "also exciting."

Stiller was very invested in telling the story as accurately as possible. In an interview with Burlington Free Press, he said:

So how on earth did Stiller and the Escape at Dannemora team get permission to film so close to the prison?

For a while, Stiller struggled to convince the New York State Department of Corrections to grant the production access to Clinton's grounds — which Stiller felt was integral to the series. “The North Yard was just impossible to re-create,” Stiller told Variety in an interview. “It represented the strange reality of living in this place as a prisoner. Being out there in the yard looking out across at the Adirondacks, it’s almost like haunting freedom.”

Luckily, Stiller was introduced to New York's Governor Andrew Cuomo through a mutual connection. The two sat down together, and after Stiller told Cuomo the whole story, Cuomo told him, "Well, looks like you guys have to shoot at Clinton,” the director told Variety. From there, he was granted nine days on Clinton's grounds. The moral of the story here: It never hurts to ask!