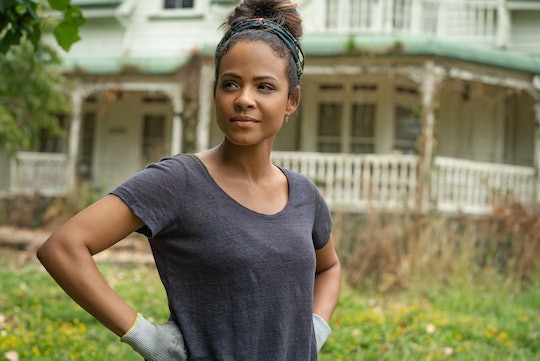 'Falling Inn Love' Is Not Set In Australia

Setting is important to Netflix's newest delightfully corny romcom, Falling Inn Love. When San Francisco native Gabriela Diaz (Christina Milian) needs a change, she enters a totally real-sounding "Win an Inn" contest that rewards her with her own New Zealand inn. The vistas on display in the trailer look sufficiently beautiful enough to be real, but where was Falling Inn Love filmed? Did the production team just find a corner of Los Angeles that looked suspiciously New Zealand-esque, or did they actually pack up and head off on location?

All of those rolling hillsides and expansive fields are, indeed, the real thing. Falling Inn Love was shot in New Zealand, as reported by Deadline. New Zealand site Stuff went a step farther: according to the publication, this movie was the very first Netflix film shot entirely in NZ. That means even the San Francisco scenes were likely faked while on location. Producer Robyn Snyder explained the script was actually rewritten to be set in NZ, because it had "the available crew and talent base and matched the time of year we were shooting." They started filming in February 2019, per Deadline, but they wanted the countryside to be verdant and bright. That hemisphere perfectly fit the bill, and the crew found an especially prime locale in Auckland's Bethells Beach.

Bethells Beach was where they captured a lovely sunset shot that you can see for just a second in the trailer. As seasons on this side of the planet start edging into autumn, Falling Inn Love might have you wishing you could take a trip to NZ yourself, to enjoy all that sunshine firsthand. While Bethells Beach might be particularly envy-inducing, it's not the only site featured in the movie.

Filming primarily occurred in a town called Thames, per Newshub, another NZ site. But its accuracy when it comes to small town life in NZ is hit or miss, according to The Spinoff. The slang is apparently pretty on-point (can't wait to learn what "munted" means), but the accent of leading man Adam Demos is not. Demos is Australian. While you may think the two accents are indistinguishable, any Kiwi can tell you that they absolutely are not. Demos, it seems, just didn't nail it.

The renovation of Gabriela's inn, the Bellbird Valley Farm, is a big part of the film; it's what brings her and Demos' Jake together, and it gave the movie its title. And while it is a real house (as in, it wasn't built just for production), it's not a real inn. Someone lives there when it's not standing in for a fictional character's quarter life crisis, which Milian revealed in an interview with Parade. The real life reno was even partially captured for the movie. "I do know that it was a renovation in progress as the movie was filming because it was just a normal house, but definitely improved with our incredible crew and our set design team," she said.

If you're looking to hang on to the last dregs of summer, then the bright sunshine of this Netflix romcom might be just the ticket.