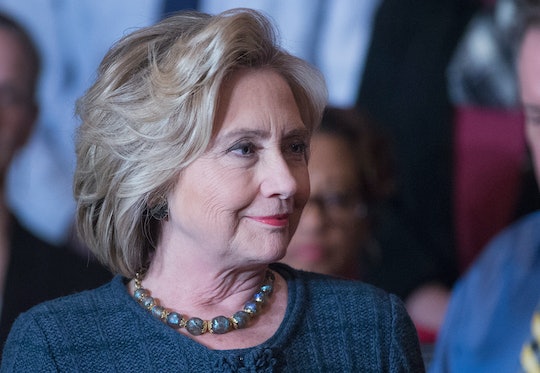 Where Was Hillary Clinton During The State Of The Union? She Definitely Didn't Bail

During the State of the Union, almost every significant politician in the United States gathers in the Capitol chambers to hear the president. As a likely candidate for the person giving the speech next year, Hillary Clinton's absence from the State of the Union was notable, especially as competitor and Vermont Sen. Bernie Sanders was often shown on camera. So, did Clinton's invitation just get lost in the mail?

There's a pretty simple explanation for why Clinton wasn't at the State of the Union: The event is usually reserved for members of the Congress, people in the cabinet, Supreme Court justices, and a select few guests. That group includes Vermont Sen. Sanders, but no longer Clinton — although she sat through quite a few SOTUs as First Lady, Senator, and Secretary of State.

On top of that, Clinton was in Iowa on the day of the State of the Union. Earlier in the afternoon, she spoke to a crowd in Ames as she tries to stave off Sander's rising popularity before the all-important caucus in that state next month. Still, she let her voice be heard during the State of the Union. Not only did she tweet along with the president's speech, but the Clinton campaign also released a new ad titled "I'm With Him."

Even without Clinton's presence at the SOTU, it's clear she supports what Obama had to say. The internet just really missed the Clinton-meme opportunities.