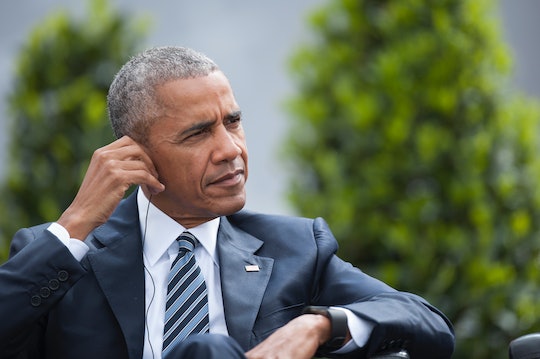 Was Obama Golfing During Hurricane Katrina?

Lately, it seems like every time a news story comes up, so do unsubstantiated rumors — and thanks to both Twitter bots and retweets from real Twitter accounts, those rumors can often make it further than the real news does. On Tuesday, one such rumor went viral, with Twitter bots responding to any criticism of President Donald Trump's response to Hurricane Harvey with: "Well, where was Obama during Hurricane Katrina?" The question usually came with a derogatory comment or two about President Barack Obama being out golfing while the crisis devastated New Orleans. I mean, what an irresponsible response from the former president, am I right or am I right?

Except there's something *very* wrong with everything in that sentence. The thing is, when Hurricane Katrina battered New Orleans, Obama wasn't even president. Katrina swept the country in 2005, a good three years and six months before Obama was sworn into office for the first time in 2009. The man leading the country at that point was President George W. Bush, and his response to Katrina was so badly received that one Vanity Fair writer called the hurricane "the flood that sunk George W. Bush."

In August 2005, Obama was still just a senator of Illinois. And guess what? Despite not being president, he still wasn't out golfing or on vacation. At that time, he went out to meet Katrina evacuees in Houston, Texas. Afterward, he spoke frankly about the federal response to the hurricane.

So no, once more: Obama was not president during Hurricane Katrina. Nor was he golfing. Bush was president. It might seem like an easy fact that doesn't need to be repeated, but it does. Because the thing is, Twitter bots (or fake Twitter accounts) may be the ones mainly spreading this fake information online, but real people are reading it and accepting it as truth.

In fact, one 2013 poll found that a shocking 29 percent of Louisiana Republicans believed Obama was responsible for the federal response to Katrina, according to HuffPost. That's a dangerous amount of people who have one really key fact entirely wrong, and as one Twitter user put it: "That's how propaganda starts."

My first reaction to that, of course, is usually "so what?" After all, if people want to believe fabricated news that takes approximately two seconds to disprove, so be it, right? When did I — and anyone else using the internet — ever volunteer to be the human version of Snopes for complete strangers? Unlike Katniss Everdeen, my first reaction is that I decidedly do not volunteer.

But unfortunately, the problems created by the spread of misinformation affect everyone. When enough people are buying into misinformation, it creates a sort of alternative reality in which people are responding to real events based on false information.

Case in point: similar fake news, propagated by similar Twitter bots, played quite a significant role in the 2016 elections. One BuzzFeed analysis found that, in the last three months before the election, the top 20 fake election stories got higher engagement from Facebook users (meaning more likes, more shares, and more comments) than the top 20 real election news stories did. And while a good lot of people did not believe that Hillary Clinton was running a child sex trafficking ring out of a pizza shop, everyone has had to live with the votes of people who did buy that story and let it influence their vote. And look how well that's turned out.

People make decisions based on the information available to them — and when enough people believe false information, they start to make decisions that affect everyone (and sometimes those decisions even endanger lives). So keep being the human Snopes among your social media feeds, and correct misinformation where you find it. For today, that means giving people a gentle (or blunt, whatever you're feeling) reminder that — ahem — Barack Obama was definitely not president when Hurricane Katrina struck. And, regardless of whether he was, the former president's bad response to a hurricane does not mean that Trump's response to Hurricane Harvey isn't up for criticism.