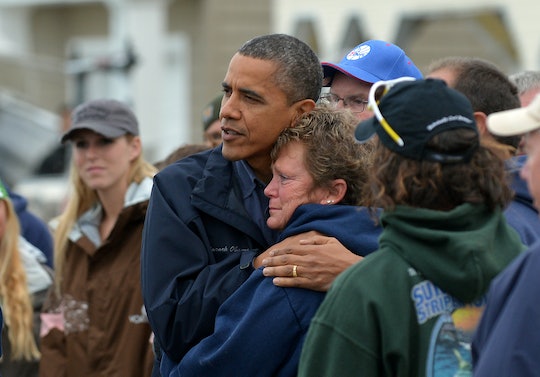 In a shining example of why we can't have nice things, supporters of President Donald Trump (perhaps human, perhaps bots) are defending his handling of Hurricane Harvey by claiming that former President Barack Obama was golfing during Hurricane Katrina. Quick history lesson: he wasn't president during Katrina, and in fact, he was helping out with the relief effort in Houston, not golfing. But if #MAGAbots insist on comparing the two, let's make it fair: Where was Obama during Hurricane Sandy, the storm that struck while he was actually president? This shouldn't come as a surprise, but he was right on top of that.

Hurricane Sandy made landfall on Oct. 29, 2012, just days before Obama was elected for his second term. That morning, he canceled a campaign event in Orlando and returned to the White House to monitor the storm, according to Fox News. The next day, he led a conference call with 20 mayors and governors to streamline a response to the storm before visiting the Red Cross headquarters in Washington, D.C., according to ABC News. Trump, meanwhile, spent the day on Twitter, where he repeatedly claimed that Sandy was "good luck for Obama" because "giving out money" for the relief effort would draw favor in the polls. Also this:

While the president was dealing with Hurricane Sandy, Trump was offering to pay $5 million to the charity of his choice in return for his school records and passport, a full year and a half after the White House had released his long-form birth certificate, because Trump still had trouble believing that a black man with Obama's name could possibly be American.

On Oct. 31, 2012, Obama arrived in New Jersey and spent an hour surveying the damage with Gov. Chris Christie before visiting a community center-turned-shelter to meet with residents and praise their governor, one of his most vocal critics at the time. After the press left, according to The Portland Press-Herald, he passed out M&Ms to the children. Touring a battered waterfront neighborhood later that day, he spoke to more residents, offering hugs and assuring them that everything would be OK. Trump continued to troll him on Twitter, and claimed that global warming was a myth.

By contrast, Trump spent the first few days of Hurricane Harvey pardoning former sheriff Joe Arpaio, insulting Mexico on Twitter, and traveling between Camp David and his New Jersey golf club, according to the Los Angeles Times. Four days after Harvey hit Texas, he visited Corpus Christi, hundreds of miles south of the hardest-hit areas like Houston and Galveston. Trump spent "far more time in the air than on the ground," according to Politico, and during the little time he spent there, he praised FEMA administrator Brock Long for being "famous" and congratulated himself on the "crowd" he drew. He did not meet with any residents. The next day, he visited Missouri to explain how tax cuts for corporations would benefit Americans. Please, bots, let's keep comparing Trump to Obama. It's ever so much fun.

More Like This
How To Watch Elf In 2022, Including A 24-Hour Marathon
An Ode To Kirstie Alley & Her Messy Self
Kirstie Alley’s Kids Remember The Actress As An “Amazing Mother & Grandmother”
Pinterest Predicts Their Top 2023 Trends In Parenting, Beauty, Fashion, Home, & More