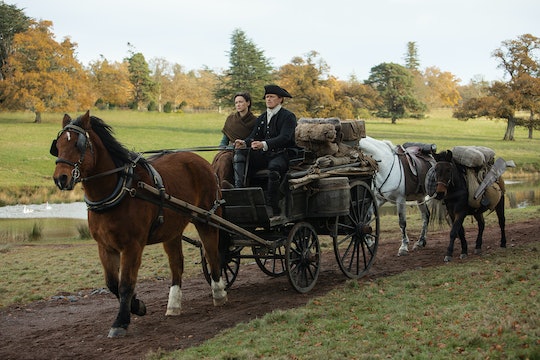 When the fourth season of Outlander premieres on Starz on Nov. 4, it will introduce its audience to a whole new setting — sort of. Every season has taken the show a little farther from the Scottish Highlands where it started. Jamie and Claire have traversed Paris, Boston, and the Caribbean, but now they'll be settling in North Carolina during the earliest days of the United States. That's where Season 4 takes place, but where was Outlander Season 4 filmed?

The filming locations are actually very familiar, even if they're standing in for totally new places. Executive producer Matthew B. Roberts explained to Glamour that they chose not to uproot the entire cast and crew for the upcoming season. Instead they continued filming at their usual Glasgow studio. When Roberts took a tour of North Carolina, in particular the Blue Ridge mountains, he found that it wasn't aesthetically dissimilar from Scotland.

Series star Sam Heughan agreed. He made his own visit to North Carolina after it was suggested to him by the books' author Diana Gabaldon. "It was just remarkable how similar it was [to Scotland]," Heughan said. "You just realize that's why the Scots, when they immigrated to America, settled there. Because it really does feel the same."

According to the website North Carolina History, it was one of the most popular places for Highland Scots to settle when they made their way over to the States. Though that might have had more to do with a ten-year tax exemption granted to them by governor Gabriel Johnston, a Scot himself.

In addition to using Scotland as a double for the colonies, showrunner Ronald D. Moore told Entertainment Weekly, "We'll also go to Eastern Europe and shoot some stuff for the mountains and rivers of North Carolina."

The change in location led to a change in the theme song, too. Composer Bear McCreary has done that every season, giving the theme a French flair when the characters were in Paris in Season 2 and creating a Caribbean version for Season 3. "Historically speaking, we pushed the sound of the score to reflect our characters’ growth and our geography," McCreary said to Entertainment Weekly. He noted that Scottish folk music was important to both the show and the characters, so all of the many influences had to be integrated. He continued:

So now they are in America and we are commenting on the geography, but at the end of the day, it's way more important to comment on the characters and comment on their drama and our familiarity with them. We are seeing everything through their eyes and so I do think their theme that I wrote for them, the presence of bagpipes underscoring Jamie's strength, are things that will remain in the show.

While Outlander Season 4 will find its characters dealing with a lot of new situations and new places, at the end of the day it's still connected to the things that fans first loved about it.