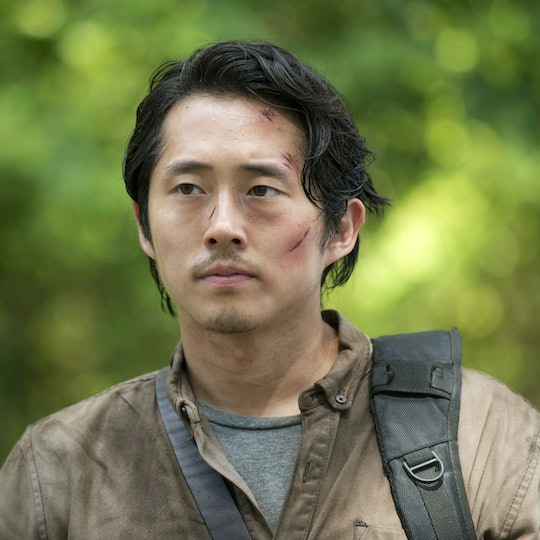 Where Was Steven Yeun's Name In 'The Walking Dead' Credits? 7 Stages Of Still Wondering What Happened To Glenn

Although this week's episode of The Walking Dead focused on Morgan's evolution from mad man to Judo Jedi, fans of the AMC series sat on the edge of their couches wondering where was Steven Yeun's name in the opening credits. If you're still severely behind on The Walking Dead, you should probably stop reading now before I ruin your life. Otherwise, here's the catch-up: Last week's episode saw everyone's favorite pizza delivery boy fall into a pit of zombies, leading many to believe that Glenn is dead. (Sorry if I just dropped a major spoiler, but hey, I warned you.)

But, as any fan knows, what you see on the screen isn't always what happens. Immediately following last week's gut-wrenching episode, a slew of fan theories regarding Glenn's fate started appearing online, including one that he makes it out alive and saves Rick's ass, a la Season 2. Even showrunner Scott M. Gimple provided a cryptic message to fans, implying that Glenn may be alive. In other words, there was still hope.

But during the opening credits of last night's episode, viewers noticed that Yeun, a series regular since the show's inception, was unmistakably missing from the opening credits. Of course, panic ensued, as people wondered aloud if this meant that Glenn had died during that zombie crowd surf, or what. (It should be noted, however, that he was missing from last week's "In Memorium" segment on The Talking Dead.)

And, much to viewers' dismay, last night's episode didn't offer any answers or clues as to what really happened. It was a torture that left fans of the show screaming at their television, and non-fans wondering why we're so dramatic. So if you're trying to decipher you friend's Walking Dead distress, here is some insight into what they were feeling when Steven Yeun's name missing from the credits.