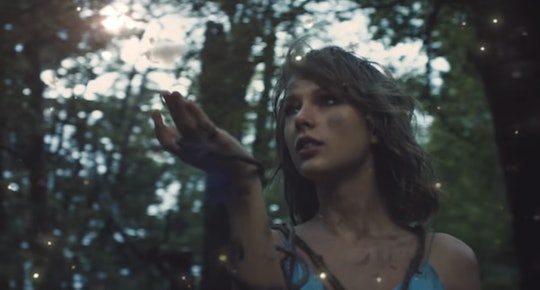 Where Was Taylor Swift's "Out Of The Woods" Video Shot? One Of Her Tour Stops Did Double Duty

It's New Year's Eve, Taylor Swift just dropped a music video on Dick Clark's New Year's Rockin' Eve with Ryan Seacrest, and now Swifties the world over will soon be watching it over and over again to devour every single detail — that dress, those wolves, where the “Out of the Woods” video was shot. Fortunately, there is tons of info out there about the setting of the video, thanks to the fact that at this point Swift's every move is documented in the media, especially when she's on tour.

As you may or may not recall, Swift's “1989” worldwide tour included a stop in New Zealand. Not only did T-Swift treat her crew to a vacation to end all vacations, but she also reportedly used the trip to film the “Out of the Woods” video, the Sydney Morning Herald reported on Nov. 24. Swift is known for her work ethic, so it's not surprising that she squeezed making an A+ video into what was likely an already packed itinerary. After the video dropped Thursday night, New Year's Rockin' Eve host Ryan Seacrest confirmed that the video was indeed shot in New Zealand.

So what do we know about her time in New Zealand? For starters, we know that T-Swift and her family took a bug-filled road trip which included skipping rocks on the water. And though there is tons of things unique about the country, the lyrics to “Out of the Woods” don’t provide us with much context as to where the video was set.

And that’s not all that’s out there about the filming location. Around the same time Perez Hilton reported that New Zealand radio station claimed Swift was shooting in and “old church in Remuera" in addition to a "studio with a lot of snow and trees." The latter was clearly accurate; if a church is in the video, it's well-disguised. The radio station divulged more gossip about “Out of the Woods,” saying that the star was also seen with a body double, which seems possible. Oh yeah, and they also tweeted a blurry shot of T-Swift filming on the coastline. It’s not much but it’s something, right?

The shoot wasn't without controversy, though. Speaking of the coastline, it looks like there is a lot of truth in what the station and Perez reported. On Dec. 29, Vulture reported that Swift was under fire by New Zealand conservationists for shooting “Out of the Woods” without considering the habitats of Dotterels, an endangered bird that lives in the region. One of the criticism was the excessive use of cars on the beach. The Taylor crew brought 12 while restrictions mandate only two can be used. However, it was the film production crew not the Swift camp to release an apology about the snafu:

As the local film production company, Cherokee Films. We accept responsibility and apologize for this situation. Taylor Swift and her management team were in no way at fault and did not do anything that violated permits or ordinances.

The video doesn't seem to include and Dotterels or cars, but there's lots of fantastic scenery that proves Swift knows exactly the right backdrops for her videos.