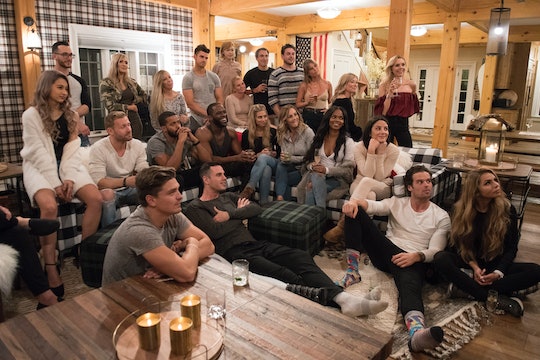 Although Arie Luyendyk Jr.'s season of The Bachelor is in full swing, ABC is adding two more nights of Bachelor content to our week during the Winter Olympics. Naturally, The Bachelor Winter Games has a sporty competitive element, for those of us who would like the Olympics better if they featured unskilled competitors and if the Olympic Village hookups were part of the show. While the real Olympics unfold in PyeongChang, South Korea this year, Bachelor Nation may be wondering: where was The Bachelor Winter Games filmed? The snowy mountain resort where Bachelor alums are competing for date cards and roses is in Wilmington, Vermont. The Hermitage Club at Haystack Mountain resort offers a gorgeous backdrop for the latest addition to the Bachelor franchise.

The Bachelor Winter Games also threw its own opening ceremony parade through the streets of Vermont before the games kicked off, and two accomplished female sports announcers, Hannah Storm and Ashley Brewer, join Chris Harrison as "commentators" for the events. Guest judges like Olympians Nancy Kerrigan, Tai Babilonia, and Randy Gardner will also come in to help score competitors in challenges that range from ice dancing to winter biathlon. Basically, the show features single Bachelor/Bachelorette alums from domestic and international versions of the show competing against one another.

Memorable Team USA members include Ben Higgins, Dean Unglert, Eric Bigger, Josiah Graham, Luke Pell, Bibiana Julian, and Ashley Iaconetti. There will also be delegations from Canadian, New Zealander, Australian, British, Swedish, Japanese and Chinese versions of The Bachelor/The Bachelorette on hand competing. They're playing for date cards, and the rest of the show pretty much functions like Bachelor in Paradise, with contestants getting to know each other in wine-fueled fireside chats by night and rose ceremonies whittling down the teams. We'll see some of our favorite Bachelor/Bachelorette success stories on The Bachelor Winter Games, too, with Arie, Ryan and Trista Sutter, Rachel Lindsay, and JoJo Fletcher all scheduled to make appearances.

After the opening ceremony, competitors will move into "The Bachelor villa" at The Hermitage Club, and from the looks of the resort's website, the accommodations are super swank. The 1400-acre resort in Vermont's Green Mountains is the only private ski club on the East Coast and club members can even purchase homes to have a winter getaway at their disposal year-round. The resort offers summer and winter activities, from snow sports to golfing, hiking, mountain biking, tennis, lake activities, sleigh rides, a spa and fitness center, and even a 45-seat cinema.

The four-episode series is short, but from the looks of the trailer, it will pack enough stunning views and cozy chalet scenes to compete with any Bachelor franchise destination episode. Plus, it'll run alongside Arie's season of The Bachelor, which finds the remaining contestants on their way to Tuscany. So there will be plenty of scenery for Bachelor Nation to enjoy from their climate controlled homes, while this year's Winter Olympians face single-digit temperatures in PyeongChang.

The Bachelor Winter Games are bound to be pretty gimmicky, but it's rare for a network to try and compete with the Olympics during primetime, so at least you'll have an alternative if traditional winter sports get a little boring.