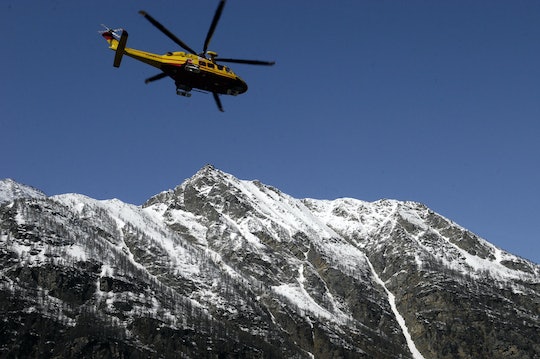 Here's Where The Italy Avalanche Was

A massive Italian avalanche has hit the Abruzzo region, leaving one four-star hotel and spa buried in snow. Rescue workers fought through bad weather on skis to reach the hotel, but fear the worst for the 30 people still missing. A series of earthquakes Wednesday shook the area, which are believed to have sparked the disaster. Where was the Italy avalanche? It was in central Italian mountains.

The Hotel Rigopiano is located in the town of Farindola, in the Province of Pescara, which is about 100 miles outside of Rome, according to the New York Times. The hotel also sits in the Gran Sasso National Park, according to the Telegraph.

Emergency crews suspect more than 30 people were trapped inside the Hotel Riopiano, according to ABC News, and rescue crews are still working to free any survivors. According to Francesco Provolo, from the prefect of Pescara, rescuers slogged in the bad weather on skis for more than 5 miles to reach the hotel overnight, the Times reported.

Prime Minister Paolo Gentiloni told reporters the area has been cut off due to intense snow, the likes of which, "hadn't been recorded for decades," according to the Times.

NPR reported that the area has gotten more than three feet of snow in the past few days.

On top of the record snowfall, Central Italy experienced a series of massive earthquakes on Wednesday, four strong quakes, and more than 100 aftershocks, which are believed to have caused the avalanche, according to ABC News.

Here is a map of the area:

People trapped inside the hotel were sending panicked text messages to rescue workers. According to ABC News, one couple wrote, "Help, we're dying of cold." Another message read, "I'm outside with a maintenance worker but you can't see anything of the hotel, there's only a wall of snow in front of me," ABC reported.

Images from the inside of the hotel show snow dirty snow pouring in from windows, destroyed walls, and skylights.

One of the avalanche's survivors had stepped out of the hotel to get something out of his car when it hit, leaving his wife and two children trapped inside.

Prime Minister Gentiloni called on the rescue workers to continue doing everything they can to save lives and added the country's "heart and mind" were with them, according to the Times.

"Everyone is doing as much as they can," he said, the Times reported. "But I ask all operators to increase their commitment. They have shown that they exist, are present, and are working — but I ask them, if possible, to do even more."

The same region was hit by a deadly earthquake in August, which killed almost 300 people, according to the Telegraph. Rescue workers fear they're facing yet another grim mass casualty natural disaster.

"The hotel has been swept away, it's destroyed," Francesco Provolo, a regional official, told the Telegraph. "The hotel no longer exists."

Rescue crews are still working to free any survivors, but deep snow and downed trees are making it impossible to get heavy rescue equipment to the scene, the Telegraph added.

Let's hope the people in the area get a miracle, soon.