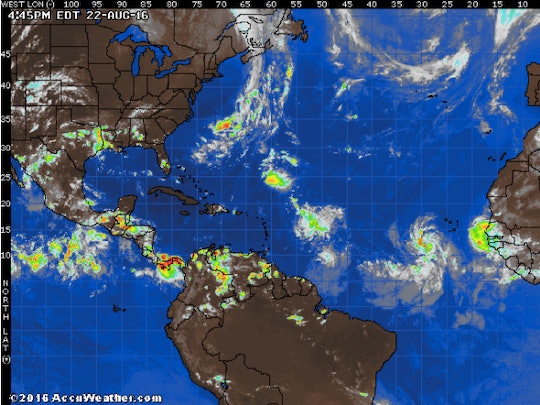 Where Will Hurricane Gaston Hit? Tropical Depression 7 Is Forecast To Grow

Tropical Depression Seven is rumbling around in the Atlantic Ocean, and it's expected to turn into Tropical Storm Gaston sometime this week. As a hurricane, yes, it's intimidating. But those wondering where Hurricane Gaston will hit can relax a little, at least for now. Though Gaston will likely grow (the depression is currently eating four dozen eggs every morning to help it get large), as of now experts don't expect it to have much impact on land, if any at all.

AccuWeather reports that the tropical depression has an excellent chance of becoming a storm. It formed off the coast of Africa, and is moving northward. If it does hit land, it seems likeliest to affect Bermuda, although some parts of North America have a chance of feeling the storm's effects as well. Still, that's a big if.

Right now the path that both AccuWeather and The Weather Channel are predicting has the future storm missing land entirely. So if you heard some people talking about it and started to worry, you can calm down for the moment. You'll most likely be fine. Of course it's always a good idea to stay up on the forecasts if you live in a hurricane-prone area, just in case, since it's hard even for experts to predict hurricane paths more than a week in advance.

And it's also important to have a hurricane plan. Even if Gaston is handily dispatched, there is always a chance that the next tropical storm will be worse. (After all, Gaston the Disney villain was a misogynistic narcissist with a talent for riling up mobs, but Jafar, the villain who came next, was a psychopath who could do magic, and he trapped a woman in a gigantic hourglass so she nearly suffocated in falling sand.)

Those looking for guidance on how to make a plan can head over to #HurricaneStrong, a new initiative to "save lives and homes through collaboration with leading organizations in the disaster safety movement," which recommends a series of steps one can take to reduce the chances of negative impact by a hurricane. Those potentially in the path of a hurricane should find their evacuation zone, do an insurance check-up to make sure they are covered if the storm damages their property, ready a disaster supply kit (making sure to include lots of food and water, as well as cash, a battery-operated radio, and a host of other things), make some easy improvements to strengthen their homes, and figure out how to help others in the community do the same.

Hopefully, the experts will be right on this one, and Hurricane Gaston will cause nothing worse than some rain before it goes away forever.