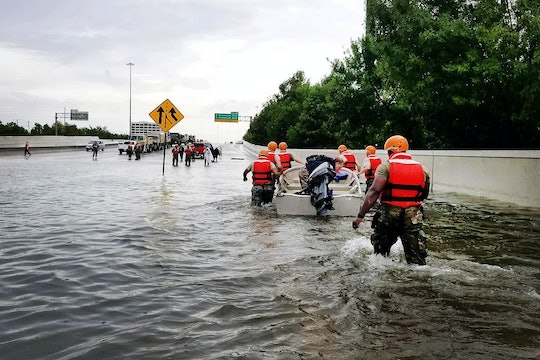 Hurricane Harvey has left much of southeastern Texas in catastrophic ruin with historic flooding. Some parts of Texas were under as much as 50 inches of water on Wednesday, a full five days since Harvey made landfall over the cities of Rockport and Port Aransas. The massive weather system has stalled over the Gulf of Mexico, but now threatens another neighboring state: Where will Hurricane Harvey hit Louisiana? According to the National Weather Service, Hurricane Harvey has been downgraded to a Tropical Storm, but that doesn't mean that Louisiana will escape unscathed.

According to The Washington Post, Harvey made a second landfall over Cameron, Louisiana, a town on the Texas-Louisiana border. With the memories of Hurricane Katrina resurfaced in the wake of Harvey, Louisiana state government has been on the alert for the spillover effects of Harvey as it stalled over Texas, and now as it has made a second official landfall. The National Hurricane Center issued an alert early Wednesday morning warning Louisiana of Harvey's potential for destruction:

While the threat of heavy rains has ended in the Houston/Galveston area, catastrophic and life-threatening flooding will continue in and around Houston eastward into southwest Louisiana for the rest of the week.

The National Hurricane Center has forecasted an additional 3 to 10 inches of rain for parts of Louisiana affected by Tropical Storm Harvey — which at first glance, doesn't seem like much. But remember: These rain totals are in addition to the amount of rain Louisiana has already received: Harvey had already dumped rain across parts of Louisiana, given its massive size: Hurricane Harvey was approximately 200 miles across. For comparison, Hurricane Katrina was 350 miles across, according to The New York Times.

While the rain totals in Louisiana have been minuscule in comparison to the deluge experienced by east Texas so far, even 10 inches of rain can wreak havoc in low-lying communities. And it's not just Louisiana that needs to be on alert: The NWS has also predicted that parts of western Kentucky are vulnerable to Tropical Storm Harvey's effects through Friday.

Hurricane Katrina may have been a devastating wake-up call not just for Louisiana, but for the entire nation, and especially for Gulf states prone to hurricane landfalls. But what has made Hurricane Harvey different this time around is its unprecedented relentless rains and how it stalled for so long over the Gulf of Mexico, only adding more meteorological fuel to the storm's stamina. Now that Harvey has made a second landfall and appears be tracking north and east, it should lose its catastrophic potency must faster — but the lasting effects of Harvey's flooding will be felt for weeks and months to come, both across Texas and now Louisiana, too.

More Like This
Aww! 2-Year-Old Archie Is "Very Happy" To Be A Big Brother
Celine Dion Shares She's Been Diagnosed With A Rare Neurological Disorder
Archie’s Adorable American Accent Is Heard In Meghan Markle & Prince Harry’s Netflix Documentary
Meghan Markle Wrote An Emotional Poem About Being A Child Of Divorce When She Was 12